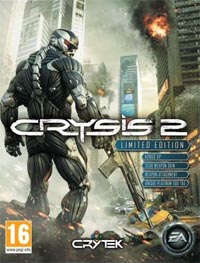 Type ‘Crysis 2’ into Google and the first result you get is the official site. The second result is a post from publisher EA’s blog titled ‘Crysis 2 Leaked’

“Crytek has been alerted that an early incomplete, unfinished build of Crysis 2 has appeared on Torrent sites. Crytek and EA are deeply disappointed by the news,” the post begins.

Indeed, a beta of the PC version of the game has been doing the rounds on torrent sites since Friday and although clearly unfinished and requiring varying levels of hoop-jumping to keep it running, it’s getting a pretty good reception from those who have downloaded and played it.

The fact that it has leaked, however, has caused gaming blogs to go into overdriven condemnation of the anticipated rampant piracy of this much awaited game. In particular, Destructoid editor Jim Sterling has gone postal with a passionate four-letter-word-littered tirade aimed squarely at pirates.

While some of Jim’s points are debatable, he makes some good points and is clearly absolutely passionate about games. As a former 8bit coder and gamer of more than three decades myself I can respect that. People love games. They appreciate the work that goes into them.

While it’s rare to hear people complain about movies or music leaking onto the Internet in file-sharing circles (in fact such situations are largely relished), games are a bit different. This leak of Crysis 2 appears to show that there’s something, even in piracy circles – I’m not sure what – that elevates the connection people have with games and their creators over the connection people have with those behind movies for example.

As both EA and Crytek plead with people to wait for the March 22 release date for Crysis 2 they appear to be supported, not just by those who never pirate, but also those who do.

Despite the beta being widely available, TorrentFreak stats show (completed) downloads of just 10,000 on public BitTorrent trackers. And that’s not because this title isn’t popular with gamers. Indeed, given the current mood, it’s not unthinkable that these low download numbers may well be a result of it being quite the opposite.

While some people are clearly happy to get an advance copy, it’s eye opening to see people on torrent sites encouraging others NOT to download it. Sure, there is the usual crowd throwing a middle finger up to the publishers while delighting in their juicy booty, but so many others are pleading with people to support Crytek by putting their hands in their pockets next month instead.

That said, there are others who aren’t heeding the advice but are treating this download as a demo to be deleted in due course, having grown tired of waiting for an official one to be released. Perhaps there’s a lesson to be learned there.

High profile game leaks don’t have to result in the doomsday scenario feared by their creators – unless they’re terrible games of course. Rewind back to October 2003 and a beta of Half-Life 2 was also leaking onto the Internet, a full 6 months before its release date, putting this 49 day advance copy of Crysis 2 in the shade. HL2 went on to do staggeringly well, selling 12 million copies to date.

Personally, as upcoming games in this genre go, I had my eyes mainly on Epic’s Bulletstorm but having seen the various videos on YouTube recorded by people playing this leaked beta, all of a sudden March can’t come soon enough. Crysis 2 looks absolutely gorgeous and while I don’t feel much warmth towards EA, I’m happy to support Crytek.

But why, when the game is sitting right there for free?

Do gamers really have more empathy with studios than their movie-going peers? Why are great games so special? What’s your take on this leak and how it should be handled? Are these download stats low because people are doing ‘the right thing’ or is fiddling about with betas just too much hassle? We’d love to hear your thoughts in the comments.

The Most Pirated Games of 2011

There are 96 comments. Add yours?