After dabbling with the Raspberry Pi we were naturally interested when an even smaller BitTorrent-capable device was offered for review.

The CuBox (pronounced ‘queue box’) arrived in a small and basic cardboard box – no expensive (needless?) Apple-style retail packaging here. Inside were some basic instructions and just two other items – a power adapter and the CuBox itself.

The CuBox (CuBox Miniature Computer) is very small indeed. Living up to its name, it’s a cube measuring 2x2x2 inches (5x5x5cms) weighing in around 90g. The image below shows the CuBox next to a Raspberry Pi for comparison.

So what’s inside this black cube? According to creators Solid Run, the CuBox is an 800mhz Arm-based computer with 1GB DDR3, an OpenGL graphic engine and a 1080p video decoder engine (full specs here, comparison with other small computers here).

Its interfaces with the outside world include a gigabit ethernet port, HDMI for video out, a couple of USB2.0 ports and a Micro SD slot (with 4GB card included). In the main the connections are all on one side of the box, as illustrated in the picture below. 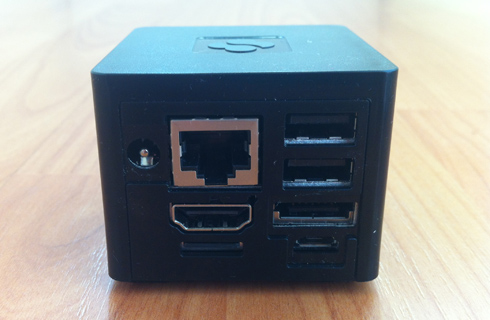 The eagle-eyed will notice that the CuBox has some additional connections the Raspberry Pi does not such as eSATA-II (for an external hard drive) and SPDIF. It also has an infra-red receiver for managing the device via remote control.

To get the best out of the device you’re also going to need a USB memory stick, USB mouse/keyboard, ethernet lead and an HDMI lead and TV/monitor.

The CuBox usually comes with Ubuntu pre-installed but there is an installer and an accompanying video in case any other distros or software packages are required instead. It’s not ridiculously simple to set up but it’s not rocket science either so if you can follow some fairly straightforward instructions you’ll be quickly up and running.

For our tests we took a look at GeeXbox, an open source Linux distro thats pack several multimedia applications into one place to make a neat home theater experience. The user interface is based on XBMC so that’s where we jumped in.

We’ve covered some of the things XBMC can do in the past, so this time we’ll look at what CuBox can do on the BitTorrent front.

At this point it’s wise to flick through ruTorrent’s settings (settings > connection) to assign your preferred port and upload/download limits etc. You’ll then need to go to the ‘download’ tab to tell ruTorrent where to save your downloads. A full instructional video is available here.

All that remains is to browse to any torrent site (not The Pirate Bay since they only have magnets) and download a torrent to your desktop machine. Simply dragging and dropping that torrent to the web browser window displaying ruTorrent will initiate the transfers in the CuBox. For the security conscious, traffic can be routed through a VPN.

At this point any TV attached to the CuBox can be safely turned off until the downloads complete. What’s also neat for the environmentally aware is that CuBox operates on just three watts of power, even less than required by a Raspberry PI and a fraction of that consumed by a light bulb.

Of course, once downloads are complete the TV can be turned back on and XBMC can be used to enjoy the recently obtained media, whether that’s video or audio. SPDIF connector aside the CuBox lacks a dedicated audio out jack though, so the sound quality will be limited to that offered by your TV.

There were a few little niggles when setting CuBox up but nothing that couldn’t be solved after a breath of fresh air and the dumping of a faulty USB memory stick. At times the CuBox was also running close to its full usable memory so the Pro version with twice the RAM might be an option for power users. That said, video playback was always smooth, even if (just like the Raspberry Pi running XBMC) mouse response was sometimes a little laggy.

There are plenty of other possible uses for the CuBox including Android TV and NAS – the wiki lists some of them in greater detail.