Over the past several years hundreds of thousands of Internet subscribers have been sued in the United States for allegedly sharing copyrighted material, mostly video.

The cases are generally targeted at “BitTorrent” users in general, not focusing on any file-sharing client in particular.

Starting last month this changed, with two cases singling out groups of Popcorn Time users. The first case was filed by the filmmakers behind “The Cobbler,” quickly followed by Pierce Brosnan’s “Survivor.”

Through the lawsuit the filmmakers hope to reveal the identity of the alleged pirates so they can settle the case for a few thousands dollars, usually outside of court.

“Popcorn Time exists for one purpose and one purpose only: to steal copyrighted content,” the filmmakers write in their complaint (pdf), alleging that the defendants are fully aware of their wrongdoing.

Taking it up a notch, the complaint suggests that merely having the application installed could already be a crime under Oregon law.

“The mere possession with intent to use a software program like Popcorn Time is the type of conduct that the State of Oregon has criminalized,” they write, claiming that the software can be characterized as a burglary tool. 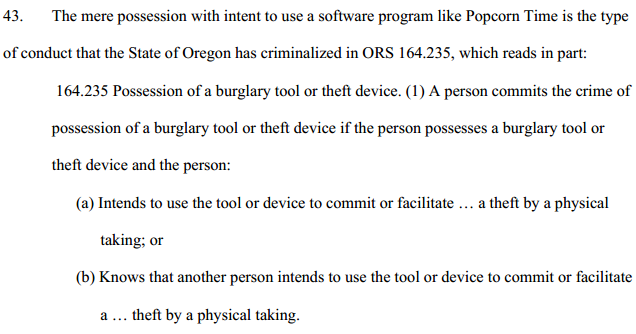 Interestingly, the filmmakers also note that many of the defendants have received warnings from Rightscorp, the anti-piracy company which launched a “Popcorn Time protection” service earlier this month.

Despite the illegality claims, the developers of the targeted fork of Popcorn Time maintain that their software doesn’t break any laws but admit that their users are at risk.

“Popcorn Time isn’t illegal. However, the use people make of the application can be illegal, depending on their country and local laws,” they previously informed TF.

“You’d think with all our warnings, the anti-piracy laws, the explanations given in the media and the common sense, users would be aware of their actions by now. Pinning a ‘Popcorn Time’ label over such a lawsuit seems a little inflated,” they added.

The Popcorn Time team has a point. In this lawsuit Popcorn Time could be replaced with any other file-sharing application that uses BitTorrent to pirate films, they all allow users to share from the same sources.

That said, Popcorn Time’s focus on pirated video does make it rather easy to do so, and significantly different from more neutral file-sharing applications that do not actively organize and select content.

In general, the Dallas Buyers Club complaint itself follows the same format as the previous Popcorn Time lawsuits and given the recent attention we can expect more of these to follow in the near future.