De La Soul Gave Away Pirated Copies of Their Own Music 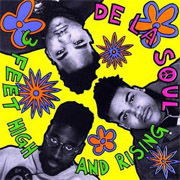 In a decade spilling over with heavy aggressive gangsta rap from the likes of N.W.A, the birth of De La Soul in 1987 was a much needed breath of light fresh air.

Two years later the trio’s debut album 3 Feet High and Rising was making waves and a quarter of a century on its magnificence hasn’t diminished one bit – if you can get to hear it.

Trouble is, unless you have it on some old-skool format (I have my vinyl here), you can’t obtain it legally online. It’s a complex story of the band’s undoubted sampling prowess and refreshingly ‘liberal’ approach to copyright, followed by a licensing nightmare that not even two decades and a half of negotiations could put to rest.

This past weekend, however, De La Soul had a rather special gift for their fans. To celebrate 25 years since the launch of 3 Feet High, the band dropped the album and their entire back catalog on WeAreDeLaSoul.com, a site set up on Valentine’s day to spread the love to fans old and new.

This musical free-for-all was great publicity for the band (who have new album coming out later this year) and a golden opportunity for people who wanted to get their hands on gems such as The Magic Number, Say No Go, and my personal favorite Ghetto Thang, without having to resort to obtaining the music from pirate sources.

On that front, however, there’s both good and bad news.

Yes, De La Soul delivered on the music front, handing over the tunes in exchange for the downloader’s email address, but those hoping to get tracks untainted by piracy will be disappointed. As first spotted by Recode, it seems De La Soul had a bit of a problem obtaining ‘official’ digital copies.

Text revealed in the metadata on the 3 Feet High MP3s appears to show that De La Soul (or someone close to them) downloaded the copies from Russian pirate site Rappalata before making them available on their own site.

The alternative explanation – that these are actually official but previously unreleased MP3s to which someone close to the band has ‘mischievously’ added Rappalata’s URL – is a fun one, but very fairly unlikely to say the least.

Sadly De La Soul’s weekend giveaway is now over, with the band’s music retreating once again into analog exile. Of course, copies of the Valentines giveaway have already appeared on torrent sites including The Pirate Bay, which raises an interesting point.

If the band are unable to digitally release the majority of their music due to copyright and licensing issues but are happy to give it away, it seems highly likely that they simply want their fans to listen to and enjoy De La Soul music in the run up the release of their new album.

Is listening to it on YouTube (possible) really any different from grabbing it from Pirate Bay? After all, not only are the samples unauthorized, the MP3s are too…..