More than a decade has passed since the file-storage empire of Kim Dotcom collapsed and Megaupload became the prime target in a high-profile law enforcement operation.

Aside from Andrus Nomm’s plea deal and conviction, progress in the criminal proceedings against Megaupload’s founder and former associates is slow.

The United States has asked New Zealand to extradite Megaupload founder Kim Dotcom, but the German-born entrepreneur and his former colleagues are fighting the request tooth and nail.

Over the past years, Megaupload has repeatedly asked the court to stay these lawsuits. The latest request came in a few days ago. Since the music and movie industry outfits don’t object to another delay, District Court Judge Liam O’Grady extended the stay until October this year. 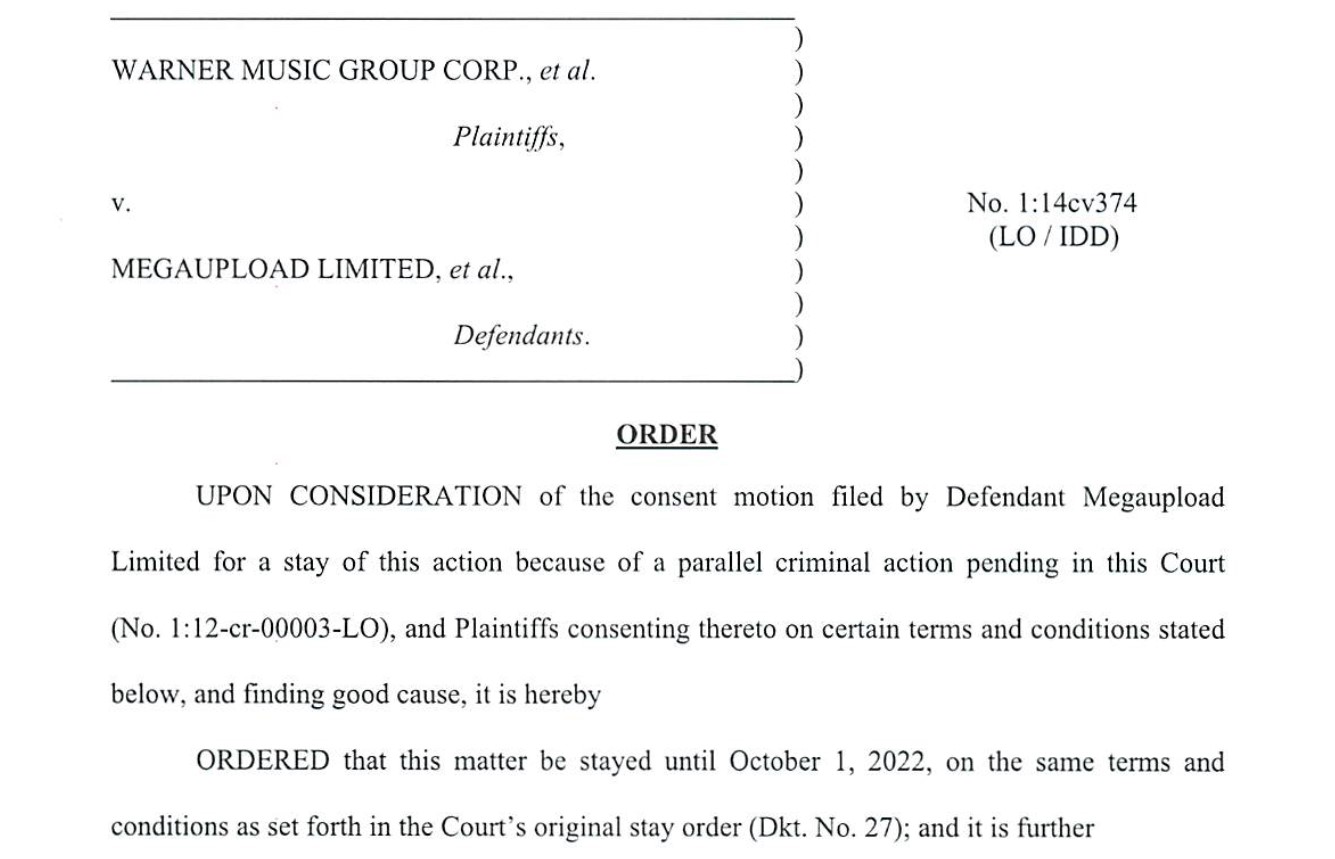 These bi-annual postponements are a mere formality now and it could take several more years before the lawsuits continue. That said, there were some other unusual developments in the RIAA and MPA lawsuits over the past weeks that are worth highlighting.

As it turns out, the most recent order to stay was the last one signed by Judge Liam O’Grady. Earlier this month the RIAA and MPA cases against Megaupload were reassigned to District Judge T. S. Ellis. There are no further details as to why this happened but Megaupload’s lawyers certainly noticed.

Last week Megaupload sent a notice of related cases to the court, suggesting that it would be better to assign the criminal case and the civil forfeiture cases to Judge Ellis as well.

“Megaupload respectively submits that the Criminal Action and two civil forfeiture actions also should be reassigned to Judge Ellis in the interests of judicial economy, so that a single judge may preside and administer these related cases efficiently.

“Although both civil copyright actions are stayed at this time, the rulings in one action may affect or control issues in the other when active litigation resumes; therefore, the Court has prudently assigned them a single District Judge to preside over both,” the notice reads.

Megaupload probably wouldn’t have made this request if it didn’t see Judge Ellis as a good option to handle these cases. While some have described him as a ‘bully in a black robe‘ or an ‘activist judge,’ most ‘critique’ appears related to the prosecution side. Megaupload certainly doesn’t seem concerned.

However, a few days after Judge Ellis was assigned to the lawsuits, the cases were reassigned to District Judge Anthony J Trenga. Again, it’s not clear why this change was made, but his name is certainly not unfamiliar when it comes to criminal copyright infringement cases.

Trenga was also the presiding judge in the case against the popular pirate site NinjaVideo. In this case, several people were convicted of criminal copyright infringement. They included the site’s founder Hana Beshara who was sentenced to 22 months in prison.

Interestingly, Megaupload also played a role in the NinjaVideo case back in 2010. As part of “Operation in Our Sites”, the U.S. Government approached Kim Dotcom’s Megaupload with a search warrant targeting files uploaded by NinjaVideo staff.

According to Kim Dotcom, the FBI made it clear that the warrant should be kept quiet so as not to jeopardize the NinjaVideo investigation. Megaupload complied with this law enforcement request and was under the impression that it had to preserve the files, which it did.

This decision to keep the files online and accessible was later used as evidence against Megaupload in their criminal prosecution. Megaupload saw this as a form of ‘evidence planting‘ but the Department of Justice shrugged that off as a “conspiracy theory.”

While these events took place well over a decade ago, the issue might be revisited in the future. That is, if Megaupload also asks for Judge Trenga to be assigned to the criminal case. At the time of writing, no such request has been made.