Online piracy is an issue that affects many industries, and game developers are certainly no exception.

While some big game companies are responding with lawsuits and takedown notices, not all game studios necessarily see piracy was something that has to be rooted out.

Yesterday, game studio RageSquid brought attention to the topic in a unique and creative way. The company, known for the downhill mountain biking game “Descenders,” is all too familiar with ‘unlicensed’ players. Their game was pirated by groups such as CODEX and SKIDROW, which are familiar names in the game now.

The game studio, however, is pretty open to pirates and has never treated them any differently. But, after some internal discussions, that changed yesterday when RageSquid decided to give all known pirates a unique flag on their bikes.

“We just realized we never thanked SKIDROW and CODEX for sharing our game. So as appreciation we gave them all a little flag they can never unequip,” RageQuid wrote on Twitter. 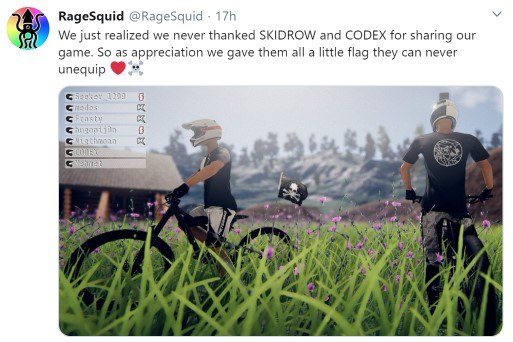 Although pirates can still play the game just fine, they are forced to wave the pirate flag. Some may see this as a badge of honor, others may take it as a punishment. RageSquid’s Studio Director Lex Decrauw explains to us that it is certainly not intended that way.

“Honestly, we were just having a laugh at the office, it was a spur of the moment thing. We were having a look at our piracy rates and someone dropped a ‘wouldn’t it be fun if all pirates were forced to sail the pirate flag?’ and that was all that was needed for our artist to whip up something neat,” he says.

“We’ve not done this as some form of punishment as some people have suggested. We acknowledge how many people play our game through pirated versions and we’re okay with that,” Decrauw adds.

The game studio confirms that roughly 60% of all Descenders players have pirated the game. While that is a very substantial figure, the effect pirates have on the company’s revenues is nothing close to that.

“It would be really easy to shout ‘Oh no, there’s X amount of people playing our game on pirated versions, we’re being robbed of X * [game price] dollars!’ but that’s simply not true,” Decrauw says.

Ultimately, RageSquid wants as many people as possible playing the game, and piracy certainly helps with that. It makes it available to those who don’t have the means to pay for it or wouldn’t have tried it otherwise, the company says.

On top of that, the pirate players may spread the word, which eventually could very well lead to more buyers. In other words, piracy can be seen as a form of promotion as well.

“More often than not the people who pirate the game wouldn’t have bought it otherwise,” Decrauw says. “On top of that, there are people who pirate it and tell their friends about the game, who then may buy it through official channels.

“All in all, we’re perfectly fine with pirates and I’d say it is absolutely not a problem at all for us. The flag is simply supposed to be a friendly joke to our pirate friends out there,” RageSquid’s Studio Director adds.

Many of these pirate “friends” will now happily wave their pirate flags going downhill. And those who don’t like it can always buy the game. Similarly, legitimate customers who fancy a pirate flag on their bike have options too, although this gimmick probably isn’t intended to draw people to pirate sites.