Piracy is a complicated and multi-faceted phenomenon. People who stream content illegally are seen as a direct threat by the entertainment industries, but many of these pirates have paid subscriptions as well.

Against this backdrop, Sarah Oh and fellow researchers from the Technology Policy Institute looked at the interplay between legal and illegal video consumption online. The main question they asked is whether pirate video consumption directly competes with legal viewing time.

The findings are based on a massive dataset that includes 5.25 terabytes of online activity data from 19,764 American households who together own more than 468,612. This data, including raw Internet traffic from 2016 to 2017, was then used to create an economic analysis.

The sheer volume of the information is a goldmine that provides some unique insights. For example, it includes the time spent on viewing legal and pirated video per operating system. While it’s merely used as an instrumental variable by the researchers, it’s worth highlighting separately.

The data shows that Windows users watch the most pirated content of all, more than 2 minutes per hour on average. This is more than Mac and Android OS users, which are both still well above the average.

“Windows PC devices show higher proportions of time spent on pirate sites than devices with other types of operating systems,” the researchers write, adding that “most devices used for piracy are represented by a few top operating systems.” 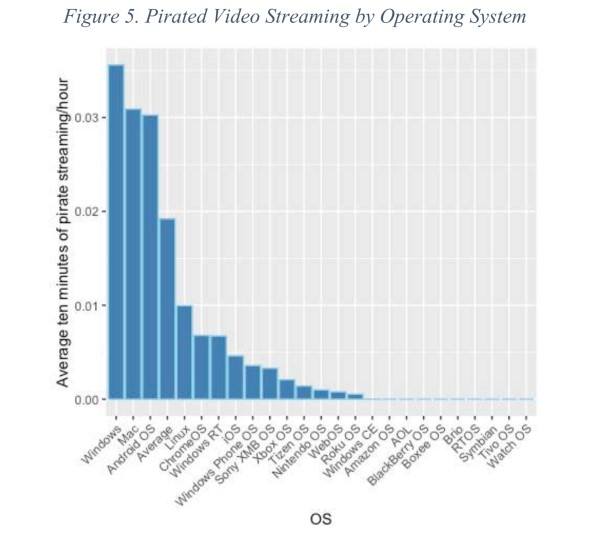 The graph above shows that Linux users view significantly less pirated video. They fall below the average, with slightly more than half a minute of pirated streaming per hour. The viewing time goes down even further for other operating systems, including iOS, Xbox, Roku and others.

When looking at the time spent on legal video consumption platforms, other operating systems come out on top. The Linux-based Tizen OS is in the lead, followed by WebOS and Roku.

Although these are intriguing statistics, the main purpose of the research is to look at the link between time spent on legal and illegal video streaming. Specifically, if one competes with the other.

The article answers this question with a resounding ‘yes’. On average, the researchers found that more minutes spent on pirate streaming decreases the time spent on legal video sites including Amazon and Netflix.

While the overall effect is strong enough to hold up across all legal services, the effect is actually the opposite for YouTube. Watching more pirated video streams is linked to watching more content on YouTube.

One of the explanations for this finding, according to the researchers, could be that both are free forms of entertainment, which may appeal to a similar audience.

The overarching conclusion, however, is that time spent watching pirated videos directly competes with time spent on legal alternatives.

The raw data, based on the volume of files, suggests that for every extra minute on a pirate site people spend 3.5 fewer minutes on a legal streaming service. However, since pirate files generally are more compressed, a one-on-one tradeoff is seen as more likely.