With decades of experience and billions of software units shifted, Nintendo is one of the most enduring and popular gaming brands on the planet.

With continuous popularity of flagship character Mario and the recent revival of Pokemon as a global phenomenon, Nintendo is still making waves in 2016. In recent times, however, the company has been making gaming headlines for less popular reasons.

Just like many big technology companies, Nintendo sees its intellectual property rights as its most valuable asset. As a result, the company is cracking down on anyone using Nintendo characters without permission, from fan-made Metroid clone AM2R to Pokémon Uranium.

Most of the recent legal threats have been made by Nintendo of America attorney Brian Sniffen and before the weekend the legal hounds were at it again, this time targeting a project that by constraint was just a few hours old.

Ludum Dare (Latin “to give a game”) is a triannual game coding competition that was first held in 2002. In recent years it has become more popular after Minecraft designer Markus Persson became a semi-regular entrant. Its unique feature is that competitors are given a theme and then expected to produce a finished game in 48 to 72 hours.

One of the team entrants to Ludum Dare 36 (theme ‘Ancient Tech’) were ASMB Games (Alex McDonald, Sam Izzo, Max Cahill, Ben Porter) with their creation No Mario’s Sky, a game featuring “exploration and survival in an infinite procedurally generated universe.” 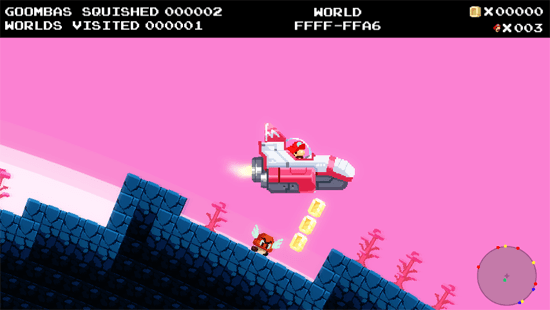 While the game’s title clearly plays on Hello Games’ No Man’s Sky, it was the Nintendo element that got ASMB in hot water with the gaming giant.

“We represent Nintendo of America Inc. (“Nintendo”) in intellectual property matters. Nintendo recently learned that content available at https://asmb.itch.io/no-marios-sky infringes copyrights owned by Nintendo. This notice is provided pursuant to the Digital Millennium Copyright Act, 17 USC § 512, and itch.io’s Terms of Service,” Sniffen wrote in a DMCA complaint sent to ASMB.

“This page provides access to downloadable files which violate itch.io’s Terms of Service and infringe Nintendo’s copyrights in its Super Mario video game franchise, including but not limited to the audiovisual work, images, and fictional character depictions….We would appreciate your expeditious removal of all infringing content.”

Faced with the wrath of Nintendo’s legal department in their inbox, ASMB responded by immediately taking the game down. Sadly that also had an effect on their standing at Ludum Dare.

“NO MARIO’S SKY IS NO MORE-IO!” the team announced. “Due to a copyright claim by Nintendo we’ve had to take the game down. As we’ve had to remove the game, we are voiding our entry into Ludum Dare. Thanks for playing, everyone!”

While it’s disappointing that the game had to be taken down, ASMB weren’t quite done. After addressing the issues highlighted by Nintendo of America, the team went back to work and removed all ‘infringing’ content from No Mario’s Sky. The end result is a new game cheekily titled DMCA’s Sky.

“Thanks everyone for playing and enjoying our little fan game,” ASMB said in a follow-up. “We would love to see an official Nintendo game in this style — a Mario Galaxy-style game in 2D within a procedurally-generated universe.”

Whether Nintendo will follow up on the request will remain to be seen but ASMB appear to be taking their little run-in with the gaming giant in their stride. Meanwhile, people are already swapping file-hosting links to the outlawed No Mario’s Sky, meaning that Nintendo has not only failed in its quest to kill the game but have also thrust it into the spotlight.