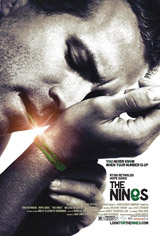 According to many people who have seen it, ‘The Nines’ is a great movie. One reviewer on the IMDb said: “As I sat in the packed Sundance theater watching the final scene of John August’s, The Nines, I shuttered. The film had sent chills down my spine, and it lasted into the night. The script was brilliant beyond anything I have ever experienced, the character development between the three parts dissecting the film was astonishing.”

The director, John August, admits that he fully expected that his movie would get pirated in the end, but what he was really concerned about was the timing: If it leaked to the internet before the Sundance Festival he feared that potential distributors could be frightened. The other alternative – turning up online before the theatrical release – could result in reduced box office takings and increased difficulties selling into overseas markets, says John.

But of course, the movie did become available online yesterday, as John explains: “My Google News Alert feed showed the inevitable had come to pass: there was a DVD rip of The Nines online. Given the subtitles attached (Spanish and French), it was almost certainly the North American retail release, which I haven’t even held in my hands yet.”

Normally at this point, one could expect those involved in the movie to start shouting about how piracy is evil – and maybe back that up with a call to an anti-piracy outfit such as Media Defender. John August takes a more relaxed view about the leak. “That’s okay. Not ‘okay’ in the sense of ‘legal’ or ‘right’. But okay in the sense of c’est la vie” he says. Once a movie leaks to the internet there’s very little that can be done, something John is resigned to: “People are going to watch the pirated version, and there’s nothing I can do about it. Sony, Interpol and the MPAA will do their best, but as the guy who made the movie, I honestly want people to see the movie. If the only way you’re going to watch The Nines is illegally, so be it.”

We’ve seen similar attitudes from people in the movie industry before. Last year, John Wilkinson, producer of the movie ‘The Man From Earth’ actually thanked pirates for downloading his movie, claiming they added greatly to the success of the film.

Interestingly, John says that from his perspective, downloading can be seen as similar to renting. He explains: “In fact, for a writer/director, there’s not a meaningful financial difference between someone watching an illegal download and getting it from Netflix, which distributes a limited number of discs to a large audience. Discuss.”

Downloading aside, John says that as a director, he’d like people to consider buying the real thing when it comes January 29th because of the extras and unique features. He also suggests that if you buy the DVD it’s easy to share with a friend “without passing along that troubling knowledge that you’ve done something illicit.” He also believes there are other benefits to being associated with the movie: “If you’re seen buying (or renting) The Nines, you’ll immediately identify yourself as someone drawn to challenging, divisive movies. So make sure to put it at the top of the stack as you slide it across the counter.”

Of course, some people can’t be persuaded to spend money on a movie in any situation, something that John is pragmatic about.

“If these reasons and/or your conscience doesn’t persuade you, it’s not hard to find The Nines online” he accepts.

“And I won’t think less of you. Probably.”