With the world in turmoil right now, today is not the ideal time for jokes, pranks, and frivolity usually associated with April 1. That being said, US-resident Dani Payson could be forgiven for thinking that someone was yanking her chain this morning.

Payson (who uses the handle Andrea Marie on Twitter) operates a store on Australia-founded print-on-demand site RedBubble. She’s currently selling printed mugs, shower curtains and phone cases – plus t-shirts, of course. Visitors to her page today, however, will discover a notable omission – the removal of a photograph of the world-famous Copenhagen statue The Little Mermaid.

According to Payson, she took the photograph herself with her own DSLR camera during a visit to Denmark and uploaded it to RedBubble so that people could have it printed to an item of their choice. Given the subject matter, the photograph is similar in many respects to thousands of others online, as this image of the listing shows. 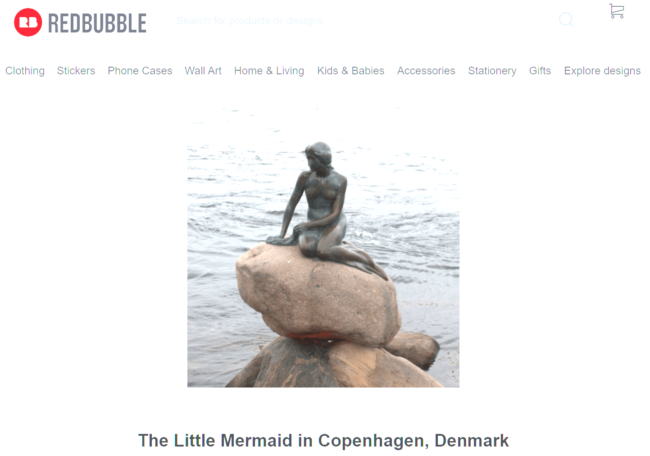 The problem for her is that the listing has now been deleted by RedBubble following a takedown request by a rightsholder.

“We’re sorry, but we had to remove some of your artwork from the RedBubble marketplace because it may contain material that violates someone’s rights,” RedBubble told the entrepreneur. “We identified this material in your artwork based on guidance provided to us by the owner of those rights.”

The owner of the rights in question was none other than Disney Enterprises, Inc. The basis for the movie giant’s claim is that Payson’s image depicts one of its “Disney Princesses”.

“Because Disney likes to show how evil they can be they’re trying to remove my personal photos from the internet of this statue stating they own it,” Payson complained this morning. 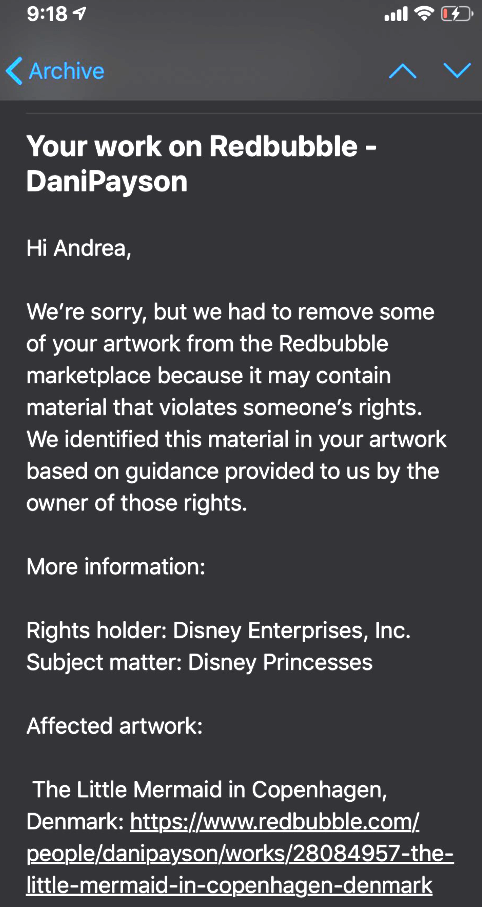 The claim is laughable, of course. Not only is Payson the copyright holder of the image in question, but the subject matter is a statue that is 107-years-old, is not animated, and is not owned by Disney. Only adding to the ridiculous mix are several other awkward facts.

The statue was unveiled in Copenhagen to celebrate the fairy tale ‘The Little Mermaid’ that was published in Denmark by Hans Christian Andersen on April 7, 1837 – almost 183 years ago. Disney’s ‘The Little Mermaid’ was released in 1989 and is actually based on the original story by the Danish author.

It’s noteworthy that despite claiming the rights to an image that has nothing to do with them, Disney paid absolutely nothing to Hans Christian Andersen for his story because his book fell into the public domain long ago. The same is true for Disney’s ‘Frozen’, which is based on Anderson’s ‘Ice Queen’.

These movies, based on someone else’s work, have together made hundreds of millions of dollars and will be vigorously protected, by Disney, for decades to come. This is the basis upon which Disney took down the RedBubble listing, which was probably actioned following a basic and bungled keyword search.