The default business model on the Internet is “free” for consumers. Users largely expect websites to load without paying a dime but of course, there’s no such thing as a free lunch. To this end, millions of websites are funded by advertising revenue.

Sensible sites ensure that any advertising displayed is unobtrusive to the visitor but lots seem to think that bombarding users with endless ads, popups, and other hindrances is the best way to do business. As a result, ad blockers are now deployed by millions of people online.

In order to function, ad-blocking tools – such as uBlock Origin or Adblock – utilize lists of advertising domains compiled by third parties. One of the most popular is Easylist, which is distributed by authors fanboy, MonztA, Famlam, and Khrinunder, under dual Creative Commons Attribution-ShareAlike and GNU General Public Licenses.

With the freedom afforded by those licenses, copyright tends not to figure high on the agenda for Easylist. However, a legal problem that has just raised its head is causing serious concern among those in the ad-blocking community.

Two days ago a somewhat unusual commit appeared in the Easylist repo on Github. As shown in the image below, a domain URL previously added to Easylist had been removed following a DMCA takedown notice filed with Github.

Domain text taken down by DMCA? 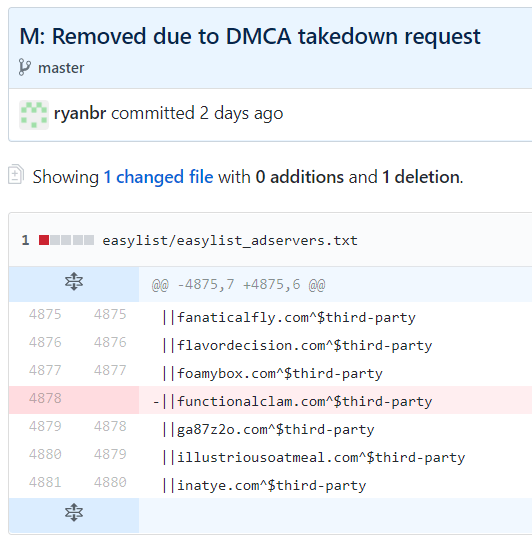 The DMCA notice in question has not yet been published but it’s clear that it targets the domain ‘functionalclam.com’. A user called ‘ameshkov’ helpfully points out a post by a new Github user called ‘DMCAHelper’ which coincided with the start of the takedown process more than three weeks ago.

Aside from the curious claims of a URL “circumventing copyright access controls” (domains themselves cannot be copyrighted), the big questions are (i) who filed the complaint and (ii) who operates Functionalclam.com? The domain WHOIS is hidden but according to a helpful sleuth on Github, it’s operated by anti ad-blocking company Admiral.

Ad-blocking means money down the drain…. 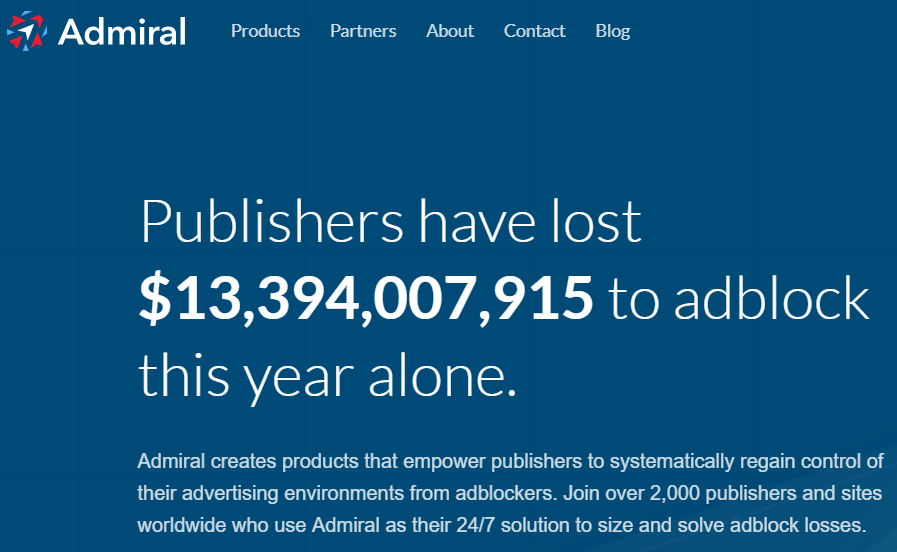 If that is indeed the case, we have the intriguing prospect of a startup attempting to protect its business model by using a novel interpretation of copyright law to have a domain name removed from a list. How this will pan out is unclear but a notice recently published on Functionalclam.com suggests the route the company wishes to take.

Combined with the comments by DMCAHelper on Github, this statement suggests that the complainants believe that interference with the ad display process (ads themselves could be the “copyrighted content” in question) represents a breach of section 1201 of the DMCA.

If it does, that could have huge consequences for online advertising but we will need to see the original DMCA notice to have a clearer idea of what this is all about. Thus far, Github hasn’t published it but already interest is growing. A representative from the EFF has already contacted the Easylist team, so this battle could heat up pretty quickly.