Fans of Dragons’ Den who watched the launch of the new series on the BBC last Sunday will have felt completely at home. Cosmetic alterations to the set aside, the format – which is licensed from Sony Pictures – remained completely unchanged.

As usual, a series of hopeful entrepreneurs pitched their business ideas to five venture capitalists with the aim of securing a cash injection. One of them, SendMyBag founder and CEO Adam Ewart, hoped to persuade the Dragons to part with a £100k investment in return for 5% equity of his door-to-door luggage delivery service.

Despite a decent pitch and having a profitable business already operating, the Dragons’ trashed Ewart’s idea as “ridiculous, ludicrous, stupid and insane,” with one of the Dragons bemoaning the fact that SendMyBag’s business model could be easily copied by a competitor.

Interestingly, and as revealed by a series of DMCA takedown notices sent by SendMyBag to Google, what can also be easily copied by SendMyBag’s competitors is the company’s intellectual property.

SendMyBag’s complaints are against a company called UniBaggage. The Dragons’ Den hopeful told the search giant on numerous occasions that UniBaggage had infringed their copyrights.

SendMyBag say that UniBaggage are using their company logo without permission. Each time Google complied with the takedown requests and de-indexed not only the image but entire webpages, meaning that UniBaggage’s website became less visible to potential customers trying to find the site using the search engine. 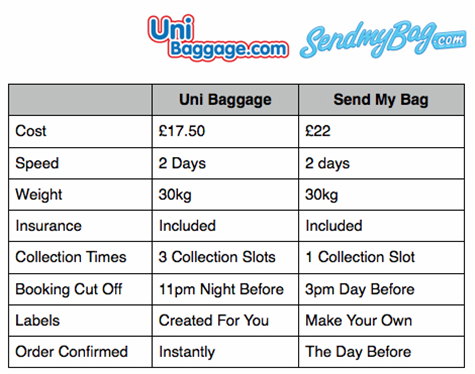 As can be seen from the screenshot above, UniBaggage did indeed use SendMyBag’s logo for price comparison purposes. In the US so-called ‘comparative advertising’ is perfectly acceptable but it took until 2008 and a directive from the European Commission to establish comparative advertising as a means for improving competition and fostering consumer choice in Europe.

“The directive provided that ‘it may… be indispensable, in order to make comparative advertising effective, to identify the goods and services of a competitor, making reference to a trademark or trade name of which the latter is proprietor… Such use… does not breach [the trademark owner’s rights]’,” explains Richard Taylor of DLA Piper.

However, advice from the lawfirm Chadwick Lawrence suggests that to avoid accusations of “unlawful comparative advertising” and complications with infringement claims, companies should “avoid reproduction of competitor’s logos.”

And this is exactly what is happening here. SendMyBag are complaining to Google about copyright infringement and may even have a claim, but considering the way the company has gone about it one has to wonder if their main aim is to put right a possible wrong, or to hinder a competitor in its quest for business.

TorrentFreak contacted both companies for comment but only UniBaggage responded. They told us that SendMyBag didn’t contact the company with any infringement complaints before filing complaints with Google.

“This company has done this to us a few times,” Managing Director Paul Stewart explained. “Each time [we complain] Google reverses [the takedowns] but we still lose say 10 days each time they do this. Considering we are a very seasonal business it does affect us.”

Stewart appears grateful that Google eventually reinstates his webpages but says his company will be taking legal advice if the problem isn’t sorted “within the next week.”

While we leave SendMyBag and UniBaggage to fight out their dispute, again we have to come back to the almost impossible task faced by the middleman – Google.

Instead of a simple email to their competitor (who may or may not have a case), SendMyBag have chosen to take their punitive action through a proxy, one that can’t reasonably expected to be judge and jury in a complex copyright dispute that is potentially affected by fair-use issues provided for in secondary legislation.

So next time you search Google and don’t find what you’re looking for, are you going to presume as you have done for the last few years that the reason for that is because the content or product you want doesn’t exist? Or are you going to wonder if a copyright holder has censored your search?

Update March 2016: After many years of battles Uni Baggage has agreed to take down the blog.