Between 2011 and 2013, protests took place in Russia in response to allegations of election-rigging and a lack of civil liberties in Russia.

The protests were targeted at Vladimir Putin so, in return, Russia’s Federal Security Service (FSB) made requests to local social media giant vKontakte to begin blocking opposition groups on the basis they were trying to organize a revolution.

A fight for control of the online narrative began. In late 2012, Russia passed legislation enabling it to blacklist and block websites, publications, and online news outlets that dared to have opinions of their own.

Russian authorities later expanded their mission to include copyrighted material and in 2017, after the government concluded that circumvention tools were undermining efforts to control what is said and ultimately thought in the country, Russia introduced a new law to crack down on VPNs, Tor, anonymizers, proxies, allowing them to be blocked too.

Services that located themselves within Russia and provided the government with access to server data were allowed to stay. But, due to the so-called ‘VPN Law’, many chose to leave rather than expose their users to monitoring. Those that remained naturally became locally popular.

To deal with the many that didn’t register or operated from overseas, Russia’s telecoms regulator Rosocomnadzor launched, among other things, an attack on Tor and a massive search engine delisting campaign.

Following the February 24th invasion of Ukraine, all of the pieces began slotting into place. With the introduction of a new law against ‘fake news’, journalists who reported stories that diverted from official government propaganda faced up to 15 years in prison. And, of course, their websites would be blocked too, ensuring that the overwhelming bulk of news published locally effectively became press releases for the Kremlin.

As some citizens dared to do their own research on overseas platforms and on those locally blocked, VPNs reportedly surged in popularity. However, a long-running campaign to make these much harder to find then stepped up a gear, with Rosocomnadzor bombarding search engines including Google with orders to remove them from their indexes. Unfortunately, if Google was to stay within the laws of Russia, the company had no choice but to comply.

As reported last summer, Russia’s attack on anti-censorship tools is not new. Over the previous two years, Roscomnadzor had ordered Google alone to remove more than half a million links from its search engine, with a single notice sometimes targeting thousands of URLs.

These notices have continued periodically since then but in January and early February 2022, Russia – which had massed around 200,000 troops on Ukraine’s borders ostensibly to conduct multiple ‘training exercises’ – stepped up the attack on VPNs too.

And the campaign didn’t stop there.

The remaining question is which services, platforms and websites were targeted by Russia? The answer to that is we just don’t know – we’re not allowed to.

It is normal for the Lumen Database to redact targeted URLs in copyright notices it makes generally available. However, if one has access to a researcher account then these can usually be revealed. It’s a crucial tool that shines light on the nature of requests and allows journalists to highlight abuses and their potential chilling effect. In the ‘VPN Law’ cases, Google simply does not provide the details since Russian law prevents it.

“Google received a request from the Russian Federal Service for Supervision of Communications, Information Technology and Mass Media (Roskomnadzor) to remove over 2170 URLs from Web Search in Russia,” an example notice reads.

“This request came under Russian federal law 276-FZ ‘On Amendments to the Federal Law ‘On Information, Information Technologies and Data Security’, commonly referred to as the ‘VPN law’. We are unable to publish the full list of URLs due to Russian law (Roskomnadzor order #217, appendix 3, dated October 25, 2017).” 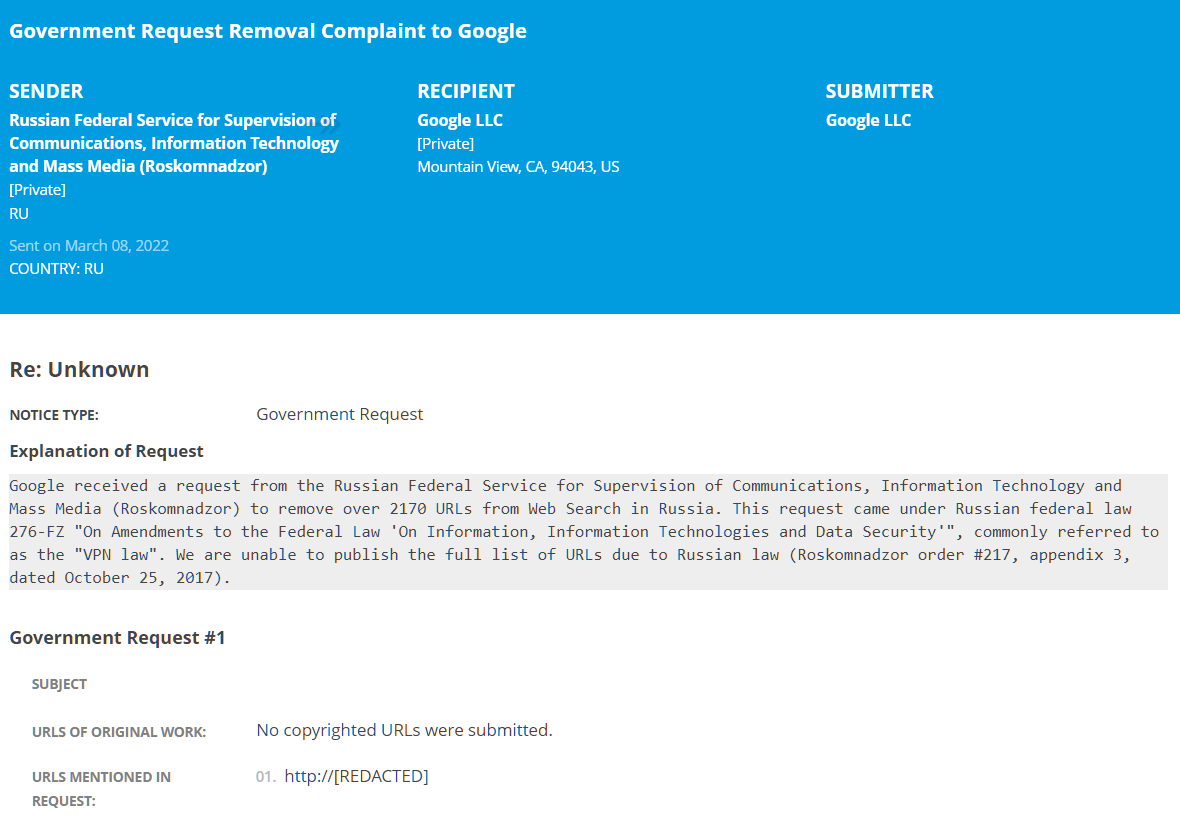 So the denial of access to information completes itself.

To censor access to resources that refuse to be censored or spew propaganda, they are blocked by the state. Then, to prevent access to VPN/anti-circumvention tools that uncensor such resources, they too are blocked and then deleted from search, with Russian law preventing an American company (in this case Google) from revealing what has been blocked.

Interestingly, the final piece of Russia’s censorship operation may yet silence the vast majority of dissenting voices, rendering every single notice it has sent to search engines thus far against VPN-related URLs completely moot. Whether it will actually commit to its warnings is currently unknown but Russia is claiming the ability to completely disconnect itself from the outside internet by implementing another draconian plan.

As The Insider explains, VPNs are unlikely to be effective moving forward since Russia is planning something much more robust – its own restricted and highly censored internal ‘internet’, cut off from the outside world.

“There is no need for global international filtering, there will simply be no external traffic by default, except through gateways under the full control of Rostelecom and Co,” says Alexey Shkittin, a man with a history of confrontation with the Russian government on internet matters.

“And internal traffic will be decrypted by DPI (deep filtering) and blocked as needed. It will be impossible to build a VPN tunnel, as well as to use the block bypass systems built into browsers. So the planned sovereign Internet is essentially a closed system at the logical level of network management, or a sovereign segment of the international network, which operates on the model of the global Internet, but is completely separated from it.”

With Russia being increasingly economically cut off from the outside world, it could be about to disconnect itself even further.