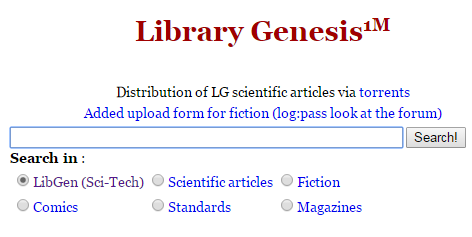 With a net income of more than $1 billion Elsevier is one of the largest academic publishers in the world.

Through its ScienceDirect portal the company offers access to millions of scientific articles spread out over 2,200 journals.

Most large universities have licenses to allow staff and students to use ScienceDirect freely, but for outsiders most of the top academic publications are behind an expensive paywall.

In common with other content behind paywalls, there are several specialized sites that allow the general public to download pirated copies of these academic works. The Library Genesis project for example, with libgen.org and bookfi.org, as well as the search portal sci-hub.org.

These sites are particularly popular in developing countries such as Iran, India and Indonesia where access to research is not as common. However, this unauthorized use is not welcomed by academic publishers.

According to Elsevier the company is losing revenue because of these sites, so in order to stem the tide the publisher has filed a complaint (pdf) at a New York federal court hoping to shut them down.

“Defendants are reproducing and distributing unauthorized copies of Elsevier’s copyrighted materials, unlawfully obtained from ScienceDirect, through Sci-Hub and through various websites affiliated with the Library Genesis Project,” the complaint reads.

“Specifically, Defendants utilize their websites located at sci-hub.org and at the Libgen Domains to operate an international network of piracy and copyright infringement by circumventing legal and authorized means of access to the ScienceDirect database,” it adds.

According to Elsevier, the websites access articles by using unlawfully obtained student or faculty access credentials. The articles are then added to the “pirate” library, backed up on their own servers.

Through the lawsuit the publisher hopes to obtain an injunction against the site’s operators, search engines, domain registrars and hosting companies, to take them offline as soon as possible.

In addition, Elsevier is requesting compensation for its losses, which could run into the millions.

Tom Allen, President of the Association of American Publishers (AAP), informs TF that websites such as Libgen pose a threat to the quality of scientific publications, as well as the public health.

“Scholarly publishers work to ensure the accuracy of the scientific record by issuing corrections and revisions to research findings as needed; Libgen typically does not,” Allen says.

“As a result, its repository of illegally obtained content poses a threat to both quality journal publishing and to public health and safety.”

The court has yet to decide whether the injunctions should be granted, but considering outcomes in recent piracy cases there’s a good chance this will happen. For the time being, however, the Libgen and Sci-hub websites remain online.