With these lawsuits the company hopes to stop the cheaters and send a clear message to others who do the same. However, Fortnite cheating remains rampant.

This week Epic Games continued its efforts by suing a rather prominent target, Golden Modz, who they’ve identified as Brandon Lucas. With more than 1.7 million subscribers on YouTube, he is the most high profile target we’ve seen thus far.

The complaint, filed at a North Carolina Federal Court, accuses ‘Golden Modz’ of copyright infringement and also names Colton Conter, a.k.a. ‘Exentric,’ as a second defendant.

“This is a copyright infringement, breach of contract, and tortious interference case in which the Defendants are infringing Epic’s copyrights by injecting unauthorized cheat software (‘cheats’ or ‘hacks’) into the copyright protected code of Epic’s popular video game Fortnite®,” Epic Games writes.

Both defendants have displayed their use of cheats in various YouTube videos. By using these cheats, they inject code into the game which modifies the original, which is a clear violation of copyright law, according to Epic Games.

Even worse, Golden Modz also stands accused of selling cheats online through the websites goldengodz.com and gtagods.com, which are often advertised in his gameplay videos.

“Lucas is operating these websites and selling these cheats and accounts for his own personal enrichment. He posts videos of people using the cheats for the same reason. His ill-gotten gains come at the expense of Epic and members of the Fortnite community.” 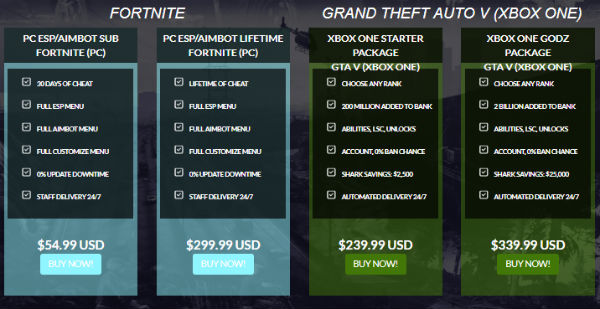 Golden Modz and Exentric team up on occasion, which appears to be the case in this video. They refer to their cheats as magical powers, informing viewers where to buy these, while hosting giveaways as well.

“At the end of the stream, I’m gonna do a three month of Fortnite magical powers giveaway. Definitely not cheats – wink wink – its magical powers okay,” Golden Modz notes.

According to Epic Games and the video’s title, there is little magical about these powers.

“In some of their YouTube videos, Defendants play (sometimes together) in duos and squads, and joke that the cheat software gives its users ‘magical’ powers, allowing them to ‘troll’ Fortnite by killing dozens of other players and ‘win’ the game,” the complaint reads.

The complaint points out several videos where the defendants showcase their hacks and cheats. Epic has asked YouTube to remove several of these, which hasn’t gone unnoticed.

In fact, last month Golden Modz uploaded a video titled “I am getting sued by fortnite…” which, as it turns out, was rather prophetical. In the video, he notes that many other YouTubers are creating these videos, and he doesn’t really see his actions as problematic.

“I’m almost kind of feeling I’m being discriminated against by Epic Games you know I’m just a kid that’s making YouTube videos and a lot of people were enjoying this,” Golden Modz said.

“Defendants should be permanently enjoined from continuing to engage in the conduct complained of herein, their profits should be disgorged, and they should be ordered to pay Epic’s damages, attorneys’ fees, and costs related to this action,” Epic writes.

A copy of the complaint, obtained by TorrentFreak, is available here (pdf).