This includes the Copyright Directive which passed in 2019 as well as the Digital Services Act, which was officially unveiled last December.

When it comes to the DSA, neither ‘side’ is completely satisfied with the proposed legislation. Copyright holders believe that it doesn’t go far enough, while others warn that the proposal will lead to more upload filters, restricting people’s freedom of speech.

Over the past months, various stakeholders have lobbied lawmakers for improvements. Various changes were proposed by EU parliament groups as well, which eventually resulted in a compromise proposal that was adopted today by the European Parliament’s Committee on Legal Affairs (JURI).

The voting process on individual proposals was preceded by a lively debate with quite a bit of pushback, mainly from the Greens/EFA and S&D groups. This included the introduction of a speedy takedown process for pirated live streams, which should be taken down within 30-minutes.

The opposition included Pirate Party MEP Patrick Breyer, who was one of the ten members who voted against the speedy takedown proposal, as Breyer himself highlighted on Twitter. 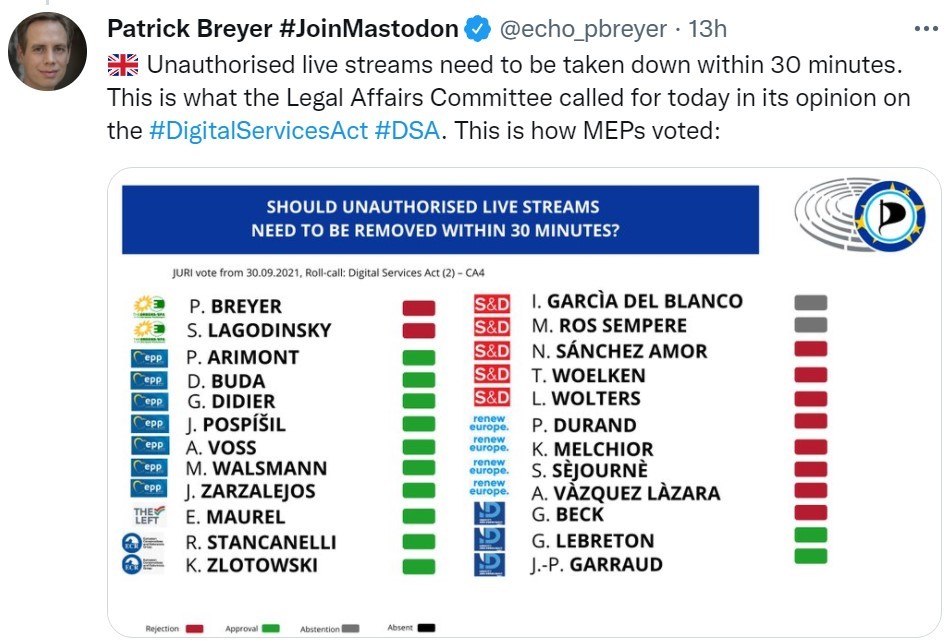 The DSA also introduces strict takedown deadlines for other ‘illegal’ content, which has to be removed within 72 hours. At the same time, it will allow “trusted flaggers” to get preferential treatment in the takedown process.

Earlier this week, several civil society groups, including the Electronic Frontier Foundation, warned Members of Parliament against this “trusted flagged” system, which they deem as unfair.

“Platforms should not be forced to apply one set of rules to ordinary users and a more permissive set of rules to influencer accounts and politicians. First-class treatment for sources and notifications of non-independent authorities or commercial entities should be rejected,” their letter reads.

These and other concerns didn’t stop the JURI Committee from voting in favor of the draft proposal. While there is still a long way to go before the DSA is approved by the EU Parliament, it has certainly moved a step closer.

Not all copyright holders are pleased with the current text either, as they believe it doesn’t go far enough. They want to further increase liability for online services providers, for example, who should ensure that infringing content can’t reappear online after it’s been removed.

“Algorithms cannot reliably identify illegal content and currently routinely result in the suppression of legal content, including media content. Reappearing content can be legal in a new context, for a new purpose, or posted by another author,” Breyer notes.

The Digital Services Act doesn’t require services to implement upload filters. However, Breyer and others fear that this will effectively be the result of the new proposals.

If we look at the controversy surrounding earlier copyright-related proposals in the EU, such as ACTA and the Copyright Act, we can expect more pushback from both sides in the months to come.