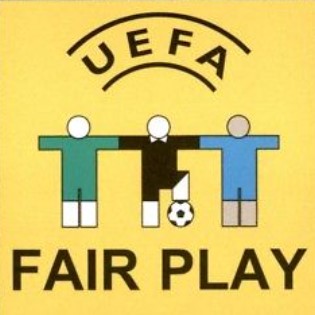 After more than two weeks, news and images of the Russian invasion of Ukraine continue to shock the world.

The conflict has caused a humanitarian crisis, affecting millions of innocent citizens who have to flee their homes in search of safety.

In response to the aggression, Governments and companies around the world have imposed tough sanctions on Russia. This also includes many sports organizations, which stopped their broadcasts in Russia.

The European Football association UEFA also took action. Late last month, it suspended Russian football clubs from participating in its international competitions. At the same time, the national team is not allowed to qualify for the World Cup that will be held later this year.

The Russian soccer federation has appealed the measures at the Court of Arbitration for Sport, which is yet to rule on the matter. Meanwhile, EUFA has turned its attention to another topic in the region.

Many rightsholders see Ukraine as a problematic country when it comes to copyright enforcement; EUFA is no exception. A few weeks before the Russian invasion started, the football organization urged the US Trade Representative (USTR) to keep Ukraine on its annual piracy watchlist.

“Ukraine has very weak laws in relation to copyright protection, and in particular with respect to imposing obligations on internet hosts to limit the copyright infringement facilitated by their service,” UEFA wrote in January.

This recommendation doesn’t come as a surprise as various rightsholder groups have called out Ukraine over the years. However, while Ukrainian cities are still being bombed, UEFA took the opportunity to reiterate its stance; asking for help in its war against online piracy.

In a follow-up to UEFA’s initial letter, the USTR asked the football organization to clarify what it means by “weak laws” and how Ukraine can address this issue. On March 3, UEFA replied, providing some detailed pointers.

The football organization stresses that it’s crucial for them to have legal and practical tools to shut down pirated streams while an event is being broadcasted. For football matches, that’s typically 105 minutes.

“Therefore, unless pirated content can be stopped at an early stage of that 105 minute period of a football match, the damage is fully inflicted,” UEFA told the USTR.

“In view of the above, UEFA would like Ukraine to provide rightsholders with effective remedies that would enable us to effect the immediate real-time removal of illegal pirate content as soon as that content can be detected by our monitoring programmes,” the football organization added. 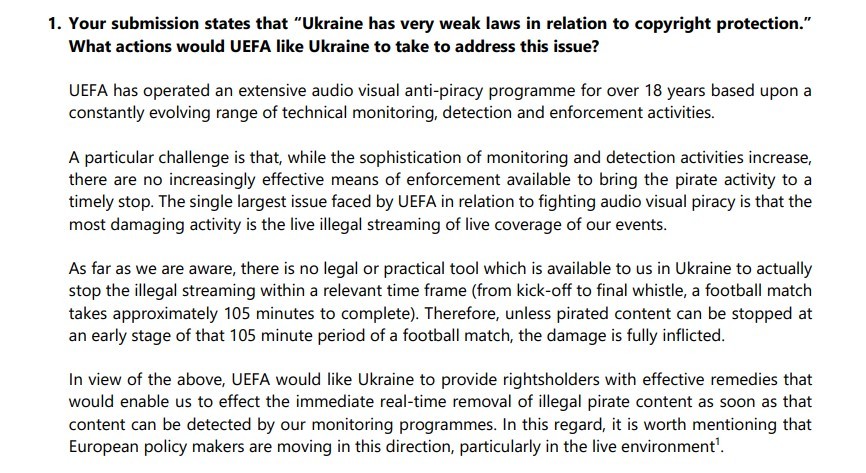 While it’s totally understandable that rightsholders have to protect their own interests, the timing of these comments is rather unfortunate. It should by crystal clear to everyone that Ukraine has other problems to deal with at the moment.

UEFA is not completely oblivious to this. The organization notes that its requests are subject to the war that’s completely destroying the country at the moment.

“[W]e are obviously aware of the current situation in Ukraine and so our foregoing requests are, of course, subject to what we hope will be a prompt resolution of the conflict and a return to a peaceful and stable Ukraine,” UEFA concludes.

A copy of EUFA’s answers to the US Trade Representative, which includes the Ukraine comments, is available here (pdf).