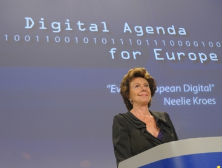 “Borders are now crossed more easily than ever before in history. It is a great opportunity for artists and creators of all kinds, as art has no limits but those of our minds,” said Kroes. “Art enriches itself by eliminating artificial barriers between people such as borders between countries.”

The breaking down of borders is made even easier these days, largely thanks to the planet’s most powerful tool for dissemination – the Internet. But the free flow of information – of culture – is a problem to those whose businesses rely on controlling where and how it is accessed.

But, Kroes says that thanks to the Internet revolution, these “content gatekeepers and intermediaries” are in a vulnerable position, referring to the many organizations that exploit and defend copyright for corporate interests.

“Like it or not, content gatekeepers risk being sidelined if they do not adapt to the needs of both creators and consumers of cultural goods,” she warned.

While noting that copyright has proven itself historically as a system capable of getting money to artists, it can also be a frustration to those wishing to preserve culture.

Referring to the “digital wonder” of those digitising cultural works for the Europeana portal, Kroes worries about the huge problem of obtaining permissions and licensing for 20th century items, media which is tied up in complex legal frameworks and managed by rights-holders.

“Today our fragmented copyright system is ill-adapted to the real essence of art, which has no frontiers. Instead, that system has ended up giving a more prominent role to intermediaries than to artists,” said Kroes.

“It irritates the public who often cannot access what artists want to offer and leaves a vacuum which is served by illegal content, depriving the artists of their well deserved remuneration. And copyright enforcement is often entangled in sensitive questions about privacy, data protection or even net neutrality.”

Kroes went even further, noting that those who avoid debate – the rights-holders – often do so to protect their vested interests, and instead choose to discuss the issue of copyright on “moralistic terms that merely demonise millions of citizens.”

According to Kroes that approach is unsustainable and the solution lies in copyright reform which looks beyond “national and corporatist self-interest.”

“I will remember artists and citizens with each step forward,” she concludes. “Artists cast light on our world; our job is to let the light shine in.”

Copyright is Failing, Who Feeds the Artists? Asks EU Commissioner