With more than 400 million active users, Facebook is by far the largest social networking site. Not surprisingly, the service is also an often used tool for torrent site admins to communicate with users.

Both users and site admins have been pleased with Facebook so far, and some sites are ‘liked’ by over a hundred thousand people. Unfortunately, it seems that Facebook itself is not very happy with all torrent site fan pages.

KickassTorrents, one of the hot newcomers in the BitTorrent scene, decided to join Facebook just three weeks ago. In just a few days the page collected more than 25,000 fans, but the fun didn’t last long as it was quickly removed (Google cache).

The founder of KickassTorrents told TorrentFreak that he received an email from Facebook stating that his fan page violated the Terms of Use and as such was removed. No explanation was given on what the violation actually was or what action should be taken to prevent this from happening in the future. 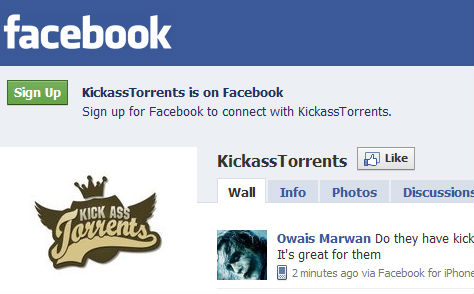 It is hard to tell what Facebook’s motivation for removing the page was. The page was used solely to update and inform fans and there were no links to torrent files posted. However, it would not be a big surprise if the association with a torrent site is enough reason for Facebook to remove a page.

In the past, Facebook has taken an aggressive stance towards file-sharing related services. The social networking site has previously blocked The Pirate Bay’s “Share on Facebook” feature, and it later threatened the LimeWire developers that it will do the same to them if they didn’t disable the share feature in their client.

With KickassTorrent’s fan page things are different though, as it didn’t link to infringing content at all. The founder of KickassTorrents has been left in the dark about why his page was removed and assumes that it’s related to the ‘torrent site’ brand.

If this is indeed the case, Facebook is not very consistent as many other torrent sites are still using the service without running into trouble. But then again, they are known for their inconsistency as dozens of sites still carry the ‘Share on Facebook’ buttons too.