Last month, the Department of Justice (DOJ) and Homeland Security’s Immigration and Customs Enforcement (ICE) seized several domains belonging to major sports streaming sites. The seizures were timed just a few days before the Super Bowl, and came as a shock to their respective owners.

One of the affected domain names was Channelsurfing.net, a website where links to external sports streams were listed. In the days following the seizure, TorrentFreak got in touch with the owner of the site who appeared to be genuinely surprised by the Government’s actions.

“The thing about my site is we never streamed anything, we always linked from other sites like justin.tv, veetle, vshare.tv, zonein.tv and others,” TorrentFreak was told.

The ChannelSurfing owner didn’t see much harm in what he did, and viewed the domain seizure as illegitimate, as did many others. In the days that followed he reviewed his options and considered taking legal action to get his domain back.

In the meantime, he registered the domain Channelsurf.eu where he continued business as usual. Until yesterday.

In a follow up to the domain seizure, U.S. Immigration and Customs Enforcement (ICE) and Homeland Security Investigations (HSI) arrested 32-year old Brian McCarthy from Texas yesterday. The authorities believe that McCarthy is responsible for the ChannelSurfing website and he has been charged with criminal copyright infringement for “reproduction and distribution” of copyrighted material.

“Brian McCarthy allegedly sought to profit by intercepting and then streaming live sporting events, hiding behind the anonymity of the internet to make a quick buck through what is little more than high-tech thievery,” Southern District of New York Attorney Preet Bhara commented.

“This arrest sends a clear message that this office, working with its partners at HSI, will vigorously protect valuable intellectual property rights through arrests and domain name seizures,” Bhara added.

The picture the authorities paint stands in stark contrast with how ChannelSurfing’s owner perceived his site, but it’s now up to the court to decide who’s side the law is on. For other U.S. based operators of streaming and file-sharing sites in general, these developments are worrisome.

The authorities hinted that more arrests may follow in the future. “We will continue to investigate illegal streaming of programming on the Internet in an effort to preserve legitimate and creative business interests and deter others from engaging in online piracy,” Homeland Security agent James Hayes said.

According to unsealed court documents, McCarthy was tracked down through information provided by the domain registrar NameCheap, Google, Paypal, Comcast, and the site’s advertisers. The documents also revealed that he made at least $90,000 from advertisements during the last five years.

Despite the arrest the ChannelSurfing website is still available on the new .eu domain, hosted on the same server as the original .net.

ChannelSurfing website, which is still available under the new domain 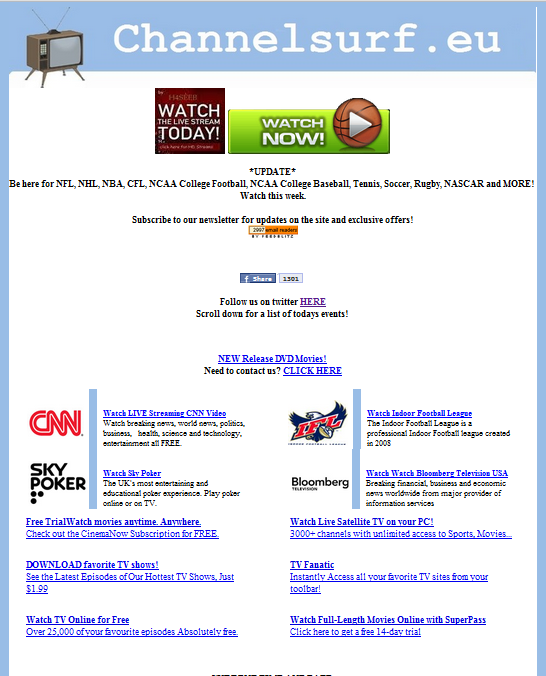