Earlier this month we reported on yet another copyright troll lawsuit in the United States.

Well, that was the theory at least.

As can be seen from the image below, documents submitted to the court clearly show the movie Night of the Living Dead: Resurrection. The problem is that the plaintiffs in the case – Dimentional Dead Productions – have made no such movie, nor do they own the rights to one.

This huge error means that a completely innocent film producer has been sucked into a controversy that has literally nothing to do with him. 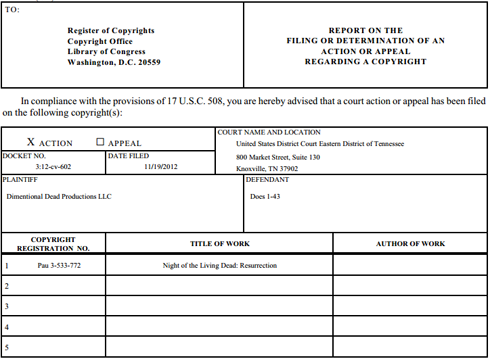 TorrentFreak has been speaking with Andrew Jones, the producer of Night of the Living Dead: Resurrection, the movie named incorrectly in the lawsuit. He’s understandably not amused by Dimentional’s incompetence.

“I’d like to respond by saying that the real story here is that the court documents have named the WRONG movie involved in this case. Dimentional Dead Productions LLC are actually the makers of NIGHT OF THE LIVING DEAD 3D: RE-ANIMATION, and not NIGHT OF THE LIVING DEAD RESURRECTION which was produced by my production company North Bank Entertainment,” Jones told TorrentFreak.

Jones’ assertion is backed up by these entries (1,2) at the US Copyright Office.

The producer also underlined that his company has never been involved in suing people for file-sharing and would not consider it.

“I have actually been personally contacted by one of the downloaders accused in this case to inform me that the court documents have mistakenly named my film as the subject of this case,” Jones explains.

“I was sympathetic to his plight and think this whole practice of suing individuals is nonsense and I would personally not be interested in pursuing any case of this nature. I support people’s rights and freedoms and do not want my film to be mistakenly associated with Dimentional Dead Productions LLC or their nonsense lawsuit,” he adds.

Jones adds that if the ISP account holders in the lawsuit highlight the error, they might have a chance of getting the case thrown out.

“Lionsgate, a US studio, are distributing this title in North America and they had a legal team check out and confirm the ownership of this motion picture before they bought it. So there is no dispute over who owns this motion picture, Dimensional Dead definitely do not,” Jones explains.

“If the accused in this case point out to the court that the WRONG film has been named in the lawsuit and that Dimentional Dead Productions LLC hold NO rights in any territory to NIGHT OF THE LIVING DEAD: RESURRECTION, then the case will surely be thrown out of court.”

But of course, what has also happened here is that Jones’ good name has been sullied by the actions of Dimentional Dead. Perhaps his lawyers should be seeking a suitable settlement in that respect? Maybe, maybe not, but the matter looks set to continue.

“I will likely pass the details of this case onto Lionsgate as they will no doubt be interested in a company claiming for a film that they have the exclusive distribution rights in North America,” Jones concludes.