Under the DMCA copyright holders have the right to demand that websites disable access to infringing content. One of the top recipients of these notices is without a doubt Google.

To give the public insight into the scope and nature of this process Google has decided to publish all takedown requests online as part of their transparency report.

“Specifically, we’re disclosing the number of requests we get from copyright owners and the organizations that represent them to remove Google Search results because they allegedly link to infringing content,” Google states. 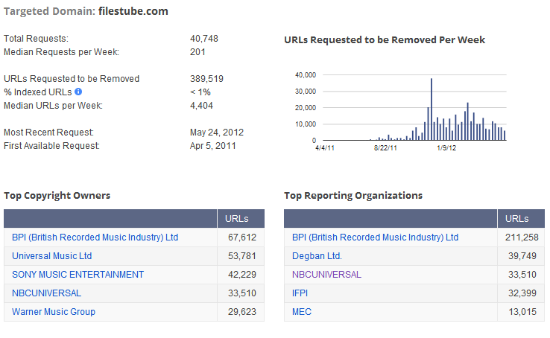 The above is interesting because FilesTube, in common with many other sites in the top list, honors DMCA takedown requests itself. FilesTube owner Arkadiusz Senko told TorrentFreak that he is surprised to see his site at the top of the list, and confirmed that his company also works directly with copyright holders to remove infringing content.

In fact, FilesTube informs TorrentFreak that they remove 2,000,000 links per month from their search index, which is more than Google. These links are removed within 24-hours and FilesTube also adds several filters per day to make sure content with specific infringing file names doesn’t later reappear.

While many of the takedown requests are valid, Google’s data reveals that in some cases the DMCA is abused to apply broad and unwarranted censorship. In this notice, for example, NBC Universal asked Google to block access to a search on FilesTube for the word “battleships,” a term that does not exclusively link to NBC content.

Looking further down the list of targeted domains we see The Pirate Bay listed in 13th place. And because of the Pirate Bay blockades in the UK, the Netherlands and elsewhere, several reverse proxy sites including those of the UK and Dutch Pirate Party are also listed.

Steve Wilson, head of Pirate Party UK’s IT Team, responded by pointing out that removing Google’s search results doesn’t do anything to prevent the actual content from being shared.

“Obviously the removal of search results does not remove the linked content and all of that content is still searchable through the Pirate Bay’s own search page. The linked content itself doesn’t relate directly to material owned by the copyright holder either, but is rather a further link to content held across many computers and accessible via a peer-to-peer network,” Wilson told TorrentFreak.

Google’s data further reveals the Microsoft is the most active copyright holder when it comes to sending takedown notices. The software giant asked Google to block access to a total of 2,544,209 links during the last year, and is followed by NBC Universal and the RIAA with 985,995 and 416,731 targeted links respectively.

One of the reasons why Google made the data public is to aid the ongoing discussions on how online piracy should be addressed. And as we will reveal later today, there’s plenty of discussion possible, especially about some borderline insane takedown requests that reveal how copyright holders sometimes shoot themselves in the foot.