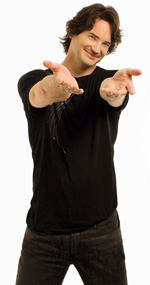 Yesterday, during his keynote speech at the CA Expo in Sydney, former Google boss Douglas C Merrill said that companies stuck in the past risk becoming irrelevant. He also had some very interesting things to say about pirates.

Merrill, who was Chief Information Officer and Vice President of Engineering at Google, left the search giant in 2008 after being poached by EMI, a key member label of the RIAA.

At EMI he took up the impressive position of Chief Operating Officer of New Music and President of Digital Business, despite admitting this week that he knew the music industry was “collapsing”.

“The RIAA said it isn’t that we are making bad music, but the ‘dirty file sharing guys’ are the problem,” he said during his speech as quoted by ComputerWorld.

“Going to sue customers for file sharing is like trying to sell soap by throwing dirt on your customers.”

But those “dirty file-sharing guys” had an even dirtier secret. During his stint at EMI, Merrill profiled the behavior of LimeWire users and discovered something rather interesting. Those same file-sharing “thieves” were also iTunes’ biggest spenders.

“That’s not theft, that’s try-before-you-buy marketing and we weren’t even paying for it… so it makes sense to sue them,” Merrill said, while undoubtedly rolling his eyes.

That same “try-before-you-buy” discovery was echoed in another study we reported on last week which found that users of pirate sites, including the recently-busted Kino.to, buy more DVDs, visit the cinema more often and on average spend more at the box office than their ‘honest’ counterparts.

Merrill’s words yesterday are not the only pragmatic file-sharing related comments he’s made in recent years. Almost immediately after his 2008 EMI appointment, he made comments which didn’t necessarily tow the company line.

“For example, there’s a set of data that shows that file sharing is actually good for artists. Not bad for artists. So maybe we shouldn’t be stopping it all the time. I don’t know,” Merrill said.

“Obviously, there is piracy that is quite destructive but again I think the data shows that in some cases file sharing might be okay. What we need to do is understand when is it good, when it is not good…Suing fans doesn’t feel like a winning strategy,” he concluded.

Less than a year later, Merrill was forced out by EMI.