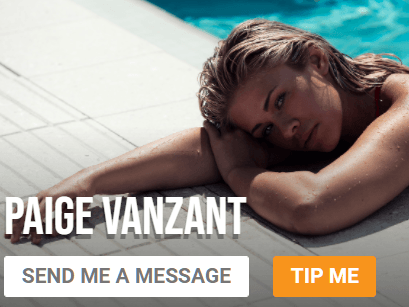 After cutting her teeth in lower-profile promotions, MMA fighter Paige VanZant made her winning UFC debut in 2014. With subsequent ‘Fight of the Night’ and ‘Performance of the Night’ awards, she cemented herself as a fan favorite but with just two wins from her last six fights, ’12 Gauge’ eventually left the UFC.

While VanZant continued to fight, athleticism and good looks opened up even greater opportunities for the former UFC fighter. In 2016, a series of impressive performances on Dancing With The Stars brought her into the mainstream and today she is reportedly making more by posting her racy images online than she ever did with the world’s premier martial arts organization.

With around three million followers, VanZant is certainly making some decent returns from her Instagram account but she’s not averse to posting some tasters online for free either. She is active on Reddit and often posts content to the MMABabes sub (NSFW). However, the self-proclaimed ‘Professional Bad Ass and Model’ also has her own site where fans can subscribe to all her glory for $9.99 per month.

This pay-per-view model is certainly popular with some but of course, there are those who would prefer not to pay for the privilege. As a result, VanZant’s images (that appear to be getting racier over time) are widely shared on social media without permission. She also has a keen following on Discord too but for people who posted content from her fansite to the platform, time could be running out.

At the time of writing, people who subscribe to VanZant’s official site can get a range of perks, including a FaceTime meeting with the model and influencer. This type of contact is likely to be popular with fans but for those who are pirating her contact, VanZant has another type of personal attention in mind.

On October 15, attorney Jason Fischer of Fischer Law, P.L. wrote to Discord informing the platform that unknown individuals had posted dozens of VanZant’s copyrighted images and videos on the platform. These were reportedly culled from her official site and posted to Discord without permission.

“It has come to the attention of Ms. Vanzant that copies of her copyrighted content have been reproduced and published on Discord,” the notice to Discord reads.

While this would usually be the end of the matter, VanZant wasn’t done.

VanZant Goes to Court in the United States

In an application filed at a California district court, VanZant’s attorney explained that since her content had been posted to Discord without permission, she is entitled to access the identities of the Discord users responsible for infringing her copyrights.

Listing more than 60 links to images and videos, the filing requests a DMCA subpoena compelling Discord to hand over the personal details of its allegedly infringing users. This information should include usernames/account names, real names, physical addresses, users’ telephone numbers, email addresses, IP addresses, and billing information for all of these accounts.

At this stage it is unclear what Ms. VanZant and her attorney intend to do with this information but for those who posted her content to Discord (and if they can be tracked down) there is likely to be no good news.

The DMCA subpoena application can be found here (1,2,3 pdf)

Pirate Streamers Save UFC 257 After ESPN+ Collapses Under The Load

UFC to Pirates: Watch McGregor on Saturday and “See What Happens”