One of the most common suggestions for artists to make money is to distribute tracks for free as a sampler, and earn money through value-added services like concerts or CDs with physical bonuses. While this is a potentially viable business model for established artists like Radiohead and Nine Inch Nails, the small or just-starting artist can find it hard to generate a big enough buzz.

That’s where sites like Jamendo and last.fm come in. Often they work in a relational way – “you like this, so we think you’ll like this…” – and can draw a number of new fans. However, it’s rare for peer-to-peer clients themselves to start promoting artists directly, but that’s what FrostWire has done.

Through their new welcome screen, FrostWire users were offered the 6-track album “Oh My” from Sean Fournier for download via BitTorrent. To make things even easier, streaming versions were also available to play, so the music could be sampled without even using the torrent. The key here is the simplicity. With one click, the songs could be played. With another click, the torrent for the songs was launched in the client, and the tracks downloaded. 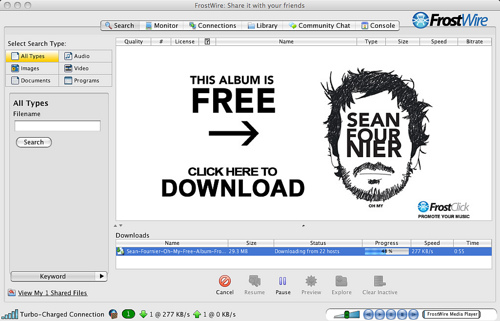 The question that first comes to mind is: Was it a success? Well, in the first weekend, there were over 25,000 downloads according to the FrostClick site. Now, there are over 32,000 completed, and over 1 terabyte of data transferred via BitTorrent. While it’s no longer being promoted, and due to the limited reach and knowledge of the torrent (to FrostWire users), the growth is still impressive.

The rulings involving peer to peer software over the past few years have directed p2p software companies from trying to build the best network for swapping your Madonna and Metallica mp3s, to ones that actively promote their ‘significant non-infringing uses’. It may cost the company a little in bandwidth (for the streaming of the example tracks) but the cost of this is less than lengthy court cases around vicarious infringement. The goodwill generated is also a nice bonus, being known as a p2p client that actively promotes small artists is good publicity.

For artists, FrostClick is a unique opportunity to reach out to an audience of millions of music fans. Sean was impressed with the results of the campaign, stating on his blog “My downloads have spiked tremendously since FrostClick / FrostWire stepped in so I wanted to take time to thank everyone over there and let them know that I appreciate all the support! This is awesome!”

FrostClick’s Kademlia told TorrentFreak they want to promote people that could get signed. “We’ll be constantly looking for more professional independent content creators to give our users more legal alternatives and great media for free.” FrostClick is currently promoting Audra Hardt, and they have several other artists lined up for their free promotion service.

Disclaimer: FrostWire is one of our ‘sponsors’. This article is written out of free will though, independent of any sponsorship.