Over the past few days a drama has been developing around the videogame The Sinking City.

Created by Ukrainian development team Frogwares, the company made the unusual step of taking to Twitter to warn consumers NOT to buy the version of its game that appeared on Steam.

In its tweet, Frogwares wrote that it had “not created the version of @thesinkingcity that is today on sale on @Steam. We do not recommend the purchase of this version. More news soon.”

After being released in 2019, The Sinking City was pulled from Steam and other platforms in 2020, with Frogwares stating that it had been forced to end its contract with French publisher Nacon. Frogwares cited breaches of its licensing agreement and according to various reports, Nacon was still collecting revenue from sales of The Sinking City, something which prompted Frogware to pull the plug.

The background is available in an open letter that was published on the Frogwares site in August last year. It stated that in return for a “financial contribution” to the development of the game, publisher Bigben/Nacon were given the rights to commercialize the game on Xbox One, PS4, Steam and Epic Games Store.

“The intellectual property would still belong to Frogwares, which has always been the only producer and owner of its games, including The Sinking City,” the developer wrote.

Frogwares launched legal action against Bigben/Nacon during August 2019 but in October 2020, the Paris Court of Appeal ruled that Frogwares should not have pulled The Sinking City from sale, adding that no further action should be taken until the dispute between the parties had been resolved.

In January 2021, Frogwares released The Sinking City on Steam but it was soon pulled, only to be replaced by Nacon last week. That move was met with disappointment from fans, who complained that the version being offered by Nacon was old and incomplete, with “no DLC, no cloud saves, no achievements.”

This reappearance prompted Frogwares to deter fans from buying the version of the game uploaded by Nacon to Steam. Then, in an announcement made yesterday, Frogwares put some additional meat on the bones, stating in a blog post that Nacon had “Cracked and Pirated” The Sinking City.

Frogwares notes that the final decision on whether it is required to deliver a Steam version of The Sinking City is set to be decided by the court “in the next months or even years”. However, it alleges that after giving Frogwares an ultimatum in December to upload a “new Steam master”, Nacon bought a copy of The Sinking City from Gamesplanet and uploaded it to Steam.

Frogwares says it managed to stop this from being distributed but then last week, Nacon uploaded the game to Steam once again.

“So on February 26th 2021 to our great surprise, we found a new version of The Sinking City was uploaded to Steam and launched. But Frogwares didn’t deliver such a version,” the company writes.

“Nacon under the management of its president Alain Falc asked some of their employees, who we even identified, to crack, hack and pirate our game, change its content in order to commercialize it under their own name.” 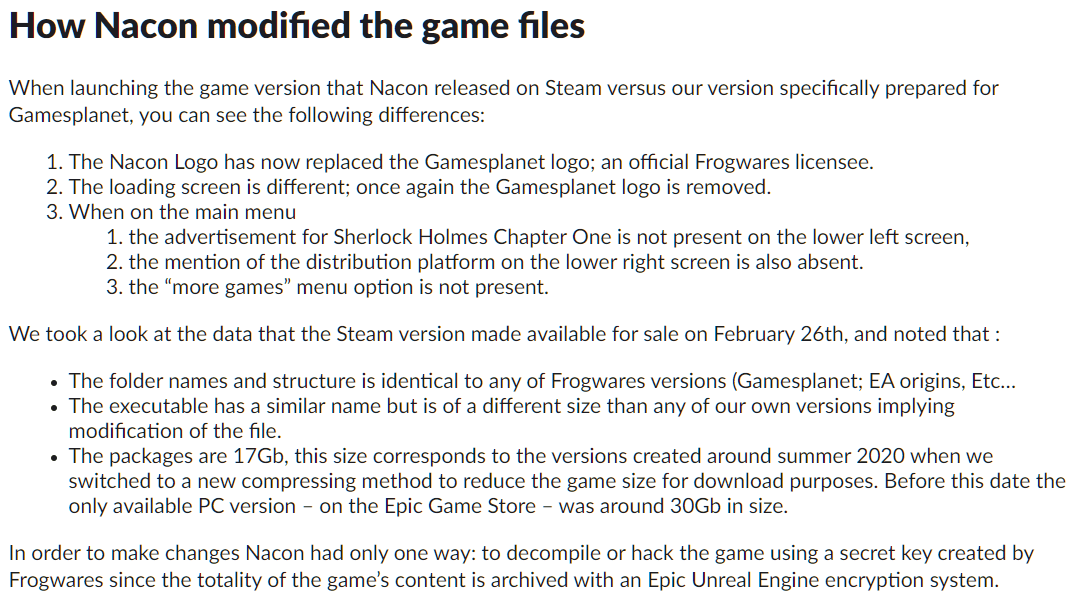 “In order to make changes Nacon had only one way: to decompile or hack the game using a secret key created by Frogwares since the totality of the game’s content is archived with an Epic Unreal Engine encryption system,” the developer continues.

“To be clear this is hacking and when hacking has the purpose to steal a product and make money with it, it’s called piracy or counterfeiting. In order to achieve this goal, programmers with serious skills need to be involved. This is not DIY work by inexperienced people, this is done by programmers who know Unreal engine well.”

Frogwares says that in order to ‘crack’ its game, Nacon needed to obtain the encryption key. The developer says it knows how that was achieved and will inform the French court dealing with the dispute. Frogwares says it carried out its own checks by downloading the version Nacon uploaded to Steam and testing its own key, which worked.

“The hackers didn’t even care to use a different encryption key than the one we created when recompiling,” the company says.

“We therefore opened the packages and we identified immediately in the config files the version that was stolen and hacked: it is a commercial version coming from the site Gamesplanet that was purchased by Nacon like any other player.”

Using information obtained from Steam, Frogwares argues that the ‘crack’ was carried out by someone at Belgian studio Neopica, which was acquired by Nacon in October 2020.

“There are long term damages we need to take care of, Nacon unpacked our data, stole our source code and used it. Nacon can create a new version of The Sinking City using our assets; they can resell, reuse, recycle our content and our tools etc,” Frogwares writes.

“We have to take the measure of what happened now and follow the best path on the legal side to prevent anything like this happening again. The owner of Nacon, Alain Falc will have to face the legal consequences of the decision of pirating and stealing Frogwares property,” the developer concludes.

In a statement, Nacon said it regrets that Frogwares “persists in disrupting the release of The Sinking City” but puts the blame at the developer’s door.

“It was Frogwares who came to Nacon to request financing for the development of the game, and to date, more than 10 million euros have been paid to Frogwares by Nacon. It was Frogwares that relied on our marketing and promotion teams, representing thousands of hours of work and several million euros worth of investment,” the statement reads.

“Now that the game has been fully developed, and published, largely thanks to Nacon’s money and work, Frogwares would like to revise the terms of the contract to their sole advantage. It’s easy to play the victim, but all we seek is that Frogwares respect its commitments both in the contract and as demanded by the courts.”