These requests have increased dramatically over the years. In 2008, the search engine received only a few dozen takedown notices during the entire year, but today it processes two million per day on average.

Data gathered by TorrentFreak from Google’s Transparency Report shows that the number of links reported in DMCA notices has more than doubled compared to last year, and quadrupled in comparison to the year before.

March 2014 Google was asked to remove roughly six million links per week, growing to eight million in 2015 and a whopping 19 million last week.

As an illustration of the sheer volume, this means that Google is now being asked to remove well over 100,000 links to alleged copyright infringing material every hour.

The number of notices continues to increase at a rapid pace and at the current rate the search engine will have to process a billion reported links this year alone. This same milestone previously took well over a decade to reach.

The graph below illustrates this sharp rise in takedown notices. 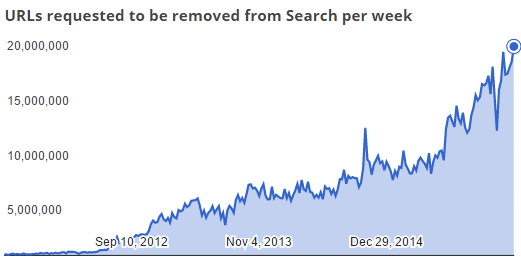 While not all takedown requests are accurate, the majority of the reported links are. As a result many popular pirate sites are now less visible in Google’s search results, since Google downranks sites for which it receives a high number of takedown requests.

In a submission to the Intellectual Property Enforcement Coordinator a few months ago Google stated that the continued removal surge doesn’t influence its takedown speeds.

Copyright holders, however, don’t share these concerns. Over the years groups such as the MPAA and RIAA have repeatedly argued that clearly infringing sites should be barred from Google’s index. In addition, they want Google to promote legal services.

As this stalemate continues, we can expect the number of reported pages to continue to rise in the future, adding millions of new URLs on a daily basis.