These requests have increased dramatically over the years. In 2008, the search engine received only a few dozen takedown notices during the entire year, but today it processes two million per day on average.

This week TorrentFreak crunched the numbers in Google’s Transparency Report and found that since its publication Google has been asked to remove over 1,007,766,482 links to allegedly infringing webpages.

The number of notices continues to increase at a rapid pace as nearly half of the requests, 420 million, were submitted during the first months of 2015. The graph below illustrates this sharp rise in takedown notices. 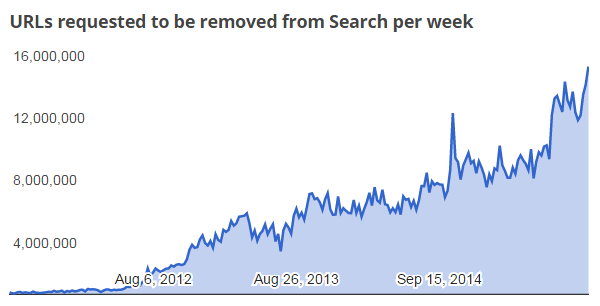 While some notices identify pages that are not infringing, most are correct. These are then removed by Google and no longer appear in the search results.

The successful takedown notices are also factored into the Google’s search algorithms, where frequently targeted websites are downranked.

TorrentFreak asked Google for a comment on the most recent milestone but the company chose not to respond on the record.

In a submission to the Intellectual Property Enforcement Coordinator last week Google stated that it has taken various measures to help copyright holders, including swift removals.

Copyright holders, however, don’t share these concerns. Over the years groups such as the MPAA and RIAA have repeatedly argued that clearly infringing sites should be barred from Google’s index. In addition, they want Google to promote legal services.

As this stalemate continues, we can expect the number of reported pages to continue to rise in the future, adding millions of new URLs on a daily basis.