Following the failed SOPA and PIPA bills, entertainment industry groups have switched their efforts away from legislation and towards voluntary cooperation with various stakeholders.

This has resulted in several agreements in which Internet providers, advertising agencies, payment processors and other companies are more actively involved in deterring piracy.

These deals have been encouraged and facilitated by the Obama administration, often outside public view. The Copyright Alert System, for example, was negotiated with help from Vice President Joe Biden.

In a letter sent to Intellectual Property Enforcement Coordinator (IPEC) Daniel Marti this week, Hollywood’s MPAA points out the importance of the Government’s involvement in this matter.

“Encouraging industry players to work together has been one of the IPEC’s most valuable contributions to combating online copyright theft,” the MPAA writes (pdf).

However, aside from the successes there are other areas where the movie and music industries would like to see more significant progress.

Despite various lobbying efforts the movie studios haven’t been able to strike a satisfactory deal with the domain name industry, search engines and hosting companies.

“…at least three areas have shown lagging progress: the use of domain names for unlawful conduct; the prevalence of piracy websites on the first pages of search results; and the use of data storage services to host websites trafficking in stolen content.”

To motivate various stakeholders to take action, the MPAA wants the U.S. Government to intervene. The Obama administration is currently working on a new Joint Strategic Plan on Intellectual Property Enforcement and the MPAA says that voluntary agreements should play a key role.

“We ask the IPEC to address each of these issues in the upcoming strategic plan, as well as to continue coordinating enforcement actions against those who engage in pervasive theft of copyrighted content,” the MPAA writes.

The movie studios provide a detailed overview of what needs to improve in all three areas, starting with domain name registrars and registries.

According to the MPAA, many domain name registrars and registries fail to live up to their contracts with ICANN, the main oversight body for the Internet’s global domain name system.

Several contract provisions require the companies to properly respond to abuse of domain names, including by sites that facilitate the sharing of copyrighted material, but thus far this has failed to yield satisfactory results.

“To date, however, registrars have failed to respect these provisions and ICANN has not enforced them, summarily rejecting nearly all complaints from rights holders,” the MPAA notes.

ICANN previously responded to the criticism by pointing out that it doesn’t plan to become the Internet police by regulating speech and content. However, the MPAA disagrees, and notes that ICANN should enforce its contracts.

“There is an immense difference between interfering with content, speech, or political freedom on the one hand, and enforcing contract provisions prohibiting unlawful conduct on the other,” the movie group writes.

Cooperation with search engines is another hot issue. Despite repeated calls to take a tougher stance against piracy the MPAA says it hasn’t made adequate progress on this front.

“Unfortunately, some search engines continue — through their search results, through suggested searches, and through sponsored advertising — to provide the pathway through which many users learn about and reach sites that engage in or facilitate online theft.”

Ideally, Google and other search engines should demote infringing sites, promote legal services, and completely remove results for sites that have been found guilty by law. In addition, auto-complete suggestions should no longer feature terms that are associated with piracy. 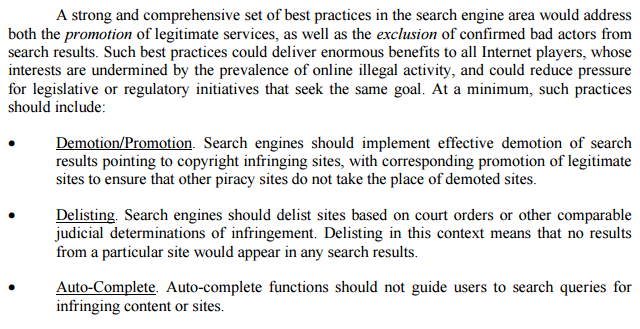 “What is important to recognize is that no company is above the law and no company should facilitate illegal behavior. Search engines frequently block and prioritize results when they decide it is in their interest — or in the public good — to do so.”

Finally, the Hollywood group would like to see more cooperation from various hosting services. There are still many companies that refuse to take action, despite their obligations under the DMCA.

“The lack of cooperation from these technology companies makes the job of enforcing rights far more difficult than it needs to be.”

In a similar vein the MPAA calls out content delivery networks including Cloudflare. These companies often offer services to pirate sites, but do very little to address copyright infringements.

“The most prominent example is the U.S. company Cloudflare. While these companies provide many valuable services to legitimate websites, they also provide them to sites dedicated to copyright theft,” the MPAA writes.

“These companies also too often refuse to enforce their own terms of service to cut off support for clearly illegal sites.”

Many of the suggestions put forward have been made in the past, so it’s doubtful that big changes will be made without an intervention. Previously, the MPAA suggested a tightening of the law to force voluntary agreements, which may remain one of the options.