Google Has Received Takedown Notices For a Million Websites

Removing search results is nothing new for Google. The company has been cleaning up its search index for years, in response to complaints from copyright holders.

Every week the search engine processes millions of requests targeting a wide range of websites that allegedly offer infringing content.

The process is fairly transparent as Google publishes all notices in a daily report. This allows us to keep track of the often staggering numbers, and today there’s a new milestone to report.

Since Google started counting, the company has now received takedown notices for a staggering one million websites. We’re not talking about the number of URLs that were reported in total, as these run in the billions, but the separate domain names that were called out.

Looking more closely at the statistics, we see that a large proportion of the targeted sites have only been flagged a few dozen times or less. Many of these were called out by mistake, including some high profile ones.

The White House, for example, is not your typical pirate site and neither is the U.S. Department of Justice. Still, both sites have been repeatedly reported to Google. The same is true for other big names such as NASA, Netflix, the BBC, and the New York Times. 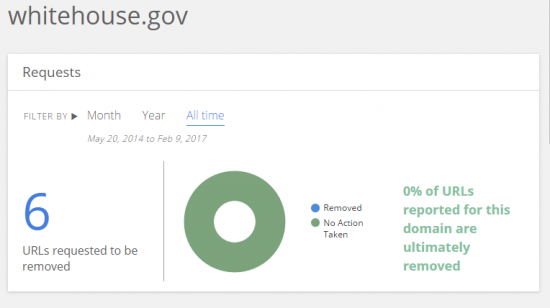 The movie database IMDb is one of the sites that’s most frequently reported in error. In recent years Google was asked to remove more than 1,000 URLs, which the search engine wisely refused to do.

While it’s easy to highlight individual mistakes among a million entries, the majority of the requests are indeed targeted at pirates.

Many pirate sites regularly switch to new domains or have alternative URLs so users can circumvent blockades. The Pirate Bay alone has well over a hundred proxies, which adds up quickly over time.