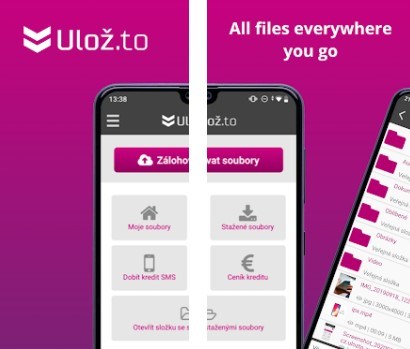 To the global audience, Ulož.to may not be a household name, but in the Czech Republic it is huge.

The file-sharing and hosting service is listed among the 35 most-visited websites in the country, while its mobile apps are frequently used as well.

Like many other file storage platforms, Ulož can be used to share a wide variety of files but according to copyright holders, many people abuse the platform to share pirated music, movies, and TV shows.

This criticism isn’t new. Over the years, Ulož has been reported to the US Trade Representative as a notorious pirate site several times. In addition, the platform was taken to court by the Czech movie distributor CinemArt, which demanded the implementation of an upload filter.

Ulož won its ‘filter’ battle with the movie company on appeal but that certainly didn’t end the piracy complaints. Every day, new takedown notices are coming in. While the file-sharing platform removes these infringing files, copyright holders want it to do more.

Czech anti-piracy company Weemazz is one of the outfits that has complained repeatedly. Working on behalf of clients such as HBO Europe, Czech Television, and TV Nova, it has sent hundreds of thousands of takedown notices to the platform. While Ulož responds to these requests, infringing content continues to be uploaded.

This prompted Weemazz to report the file-sharing platform to Google, asking the company to remove the app from the Play Store. After an independent investigation, this is precisely what Google did.

“Google has complied with our request to delete the Uloz.to application, Weemazz boss Radim Horák says. “Based on its own inspection, Google confirmed our findings and removed the application from the Google Store.“

Since last week, the Ulož app is no longer available in the Play Store. Interestingly, Apple users can still find it in the App Store. In addition, the site remains available through regular web browsers as well.

The Ulož Android app can also be installed through another route. Right around the time that the app was removed from Google’s Play Store, the service sent out a tweet, pointing to a page where users can find the APK, to install it directly on their Android devices. 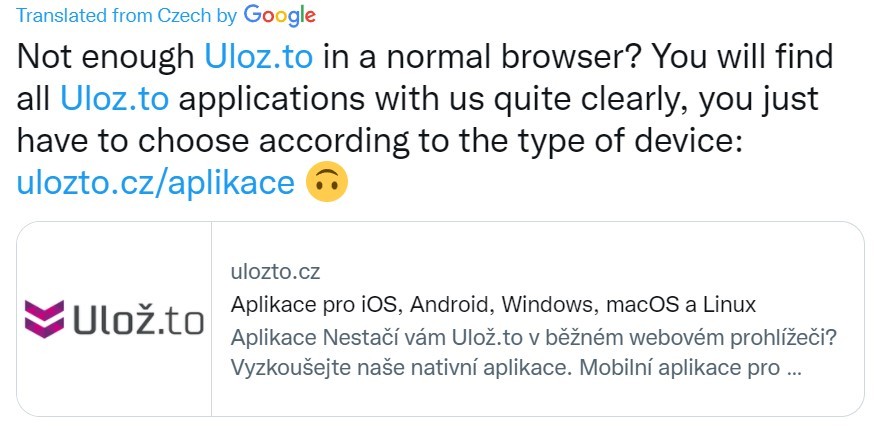 Speaking with TorrentFreak, an Uloz.to spokesperson said that the company doesn’t agree with the complaints. It filed a counternotice with Google, hoping to have the app restored in the near future.

“We are still in the middle of the counternotice process. We believe that the app will become available again because the claims of rightsholder representatives are more FUD than solid legal argumentation,” Uloz.to informed us.

“But it is hard to guess how Google decides in the end because there are no fixed rules. We all can only hope that new regulations will enforce some transparency on gatekeeper platforms like Google, Apple, Facebook, Amazon and so on.”

There are indeed new regulations being discussed in the EU and the US that challenge the power of major tech platforms. On the other side, however, there are “upload filter” proposals and regulations planned as well, which could negatively impact Ulož.

In addition to disagreeing with the app’s removal, the filesharing platform is also disappointed in the local Czech media. According to Ulož, these only repeated what copyright holders and their representatives wrote in a press release.

“All news articles are based on one press release sent by rightsholder representatives. Nobody contacted us for comments and clarification,” Ulož tells us

Rightsholders are Happy for Now

The counternotice could change things but, for now, Weemazz and its clients are pleased to see that Google has removed the app. The anti-piracy company says that it sends out thousands of takedown notices per day without seeing any improvement, so something had to be done.

“In January alone, we had illegally shared content on more than 100,000 links removed from Uloz.to. Nevertheless, Uloz.to has not yet taken any measures to prevent illegal sharing in any way or at least better inform its users about the illegality of their activities,” the company says.

Ideally, rightsholders would like to see some kind of advanced upload filtering on the file-sharing platform. However, as the legal battle with CinemArt has shown, Ulož opposes such strict measures.

According to Weemazz, this leaves rightsholders with no other option than to find alternative means to address the piracy problem. In addition to going after the app, this includes going after Uloz.to users directly, demanding that they pay millions of Czech crowns in damages.

TorrentFreak reached out to Weemazz to hear more about these reported actions against users, but the company didn’t immediately reply.