Last October, the RIAA secured a major victory in its piracy lawsuit against YouTube-rippers FLVTO.biz and 2conv.com and their Russian operator Tofig Kurbanov.

A Virginia federal court issued a default judgment in favor of the RIAA, which represented several prominent music companies.

Following this win, the RIAA demanded $83 million in damages for the widespread copyright infringement that allegedly took place through the sites. This request was met with heavy opposition from Mr. Kurbanov but a few weeks ago it was granted nonetheless.

The RIAA, which described the legal battle as a landmark case, was happy with the outcome. As it stands, it will act as a deterrent against similar stream-rippers and other potentially infringing sites. However, it is not over yet.

While Mr. Kurbanov previously walked away from the U.S. court battle, he now intends to keep on fighting. In a new filing submitted a few days ago his legal team informs the court that it will appeal the piracy liability ruling and the damages award at the Fourth Circuit Court of Appeals. 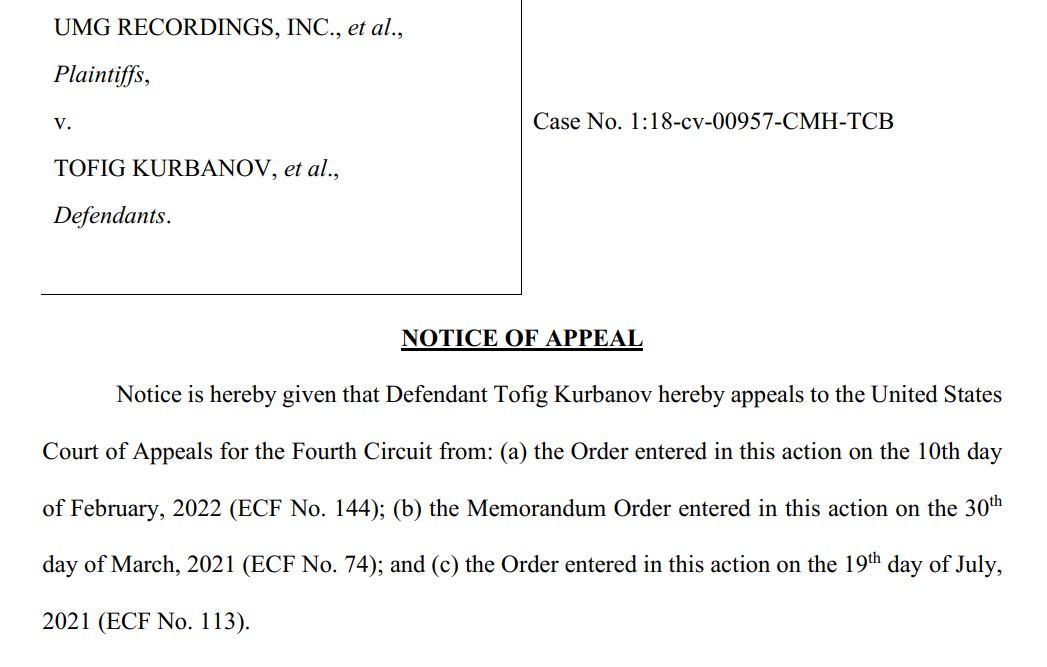 Speaking with TorrentFreak, defense lawyer Val Gurvits explains that his client will challenge the fact that the sites are held liable for millions of dollars in damages. This is wrong, he believes, as the rightsholders didn’t present any concrete evidence of copyright infringements that took place in the United States.

“At this point, Mr. Kurbanov is doing this less for himself and more to shed light on a legal process that has gone off the rails,” Gurvits tells TorrentFreak.

This apparent lack of evidence was also brought up in a response to the damages recommendation issued by the magistrate judge last fall. However, District Court Judge Claude Hilton later concluded that these recommendations are in line with the law.

Mr. Kurbanov’s legal team sees this conclusion as a clear error. If it stands, they fear that any website owner can be held liable for millions of dollars in damages, without the need for concrete evidence.

This would be a great precedent for the RIAA and its members, but not so much for the public at large.

“If the record companies can really get multi-million dollar judgments without having to prove a single instance of infringement within the United States, then no one who operates a website is safe,” Gurvits says.

“And it is the American consumer that will suffer the most as websites simply decide that it’s just easier to block visitors from the US. That doesn’t benefit anyone… other than the record companies, of course.”

The opening brief has yet to be filed at the Fourth Circuit Court of Appeals and we plan to report on that in due course. The same is true for RIAA’s response to it.