To help hundreds of millions of people find what they search for, Google has implemented some nifty features over the years.

A search for a movie title, for example, doesn’t only return the most relevant websites. It also comes with ‘snippets’ that show detailed information about the film, including review score and showtimes, when available.

Another Google feature is the movie reel. A search for “Disney Films” returns a carousel of Disney produced titles, and the same is true for other studios and platforms such as Netflix. This trick even works for release years and movie genres.

These features are all powered by Google’s advanced algorithms which tend to be very accurate and effective. The search results are appealing to most users and we assume that the movie studios are happy with them too. The more exposure, the better, after all.

That said, there may be some uses for the movie carousel that Hollywood will be less pleased with. As it turns out, it also works for several piracy-related searches.

For example, when we search for YIFY and YTS movies, we see a featured list of movies that were released by the popular torrent site. While these posters don’t link to any torrents, the torrent site’s domain name is at the top of the search results. 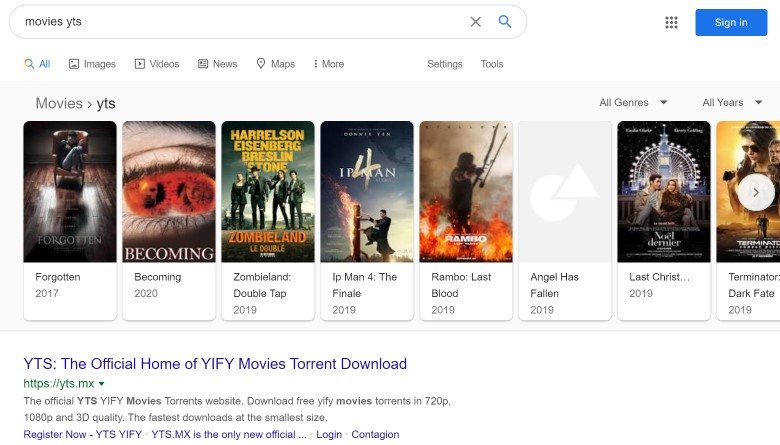 This result makes sense, as YTS is a movie distributor. However, it certainly doesn’t have the rights to share these films in public.

It appears that the movie titles and posters are somehow being scraped from the YTS website as the posters do indeed match up YTS torrent releases. The best illustration is the missing poster for Angel Has Fallen. YTS removed that film from its site as part of a copyright settlement.

The results may differ depending on one’s setup and configuration but we confirmed that the feature works in various settings. Also, it’s not limited to YTS and YIFY either. A search for “Fmovies films” returns a similar reel.

As mentioned, the posters don’t link to any infringing content. Clicking on them simply brings up more movie details. That said, it’s pretty unusual that pirate releases are highlighted at all.

That also applies to Google’s list of “pirated movies,” which shows up as a ‘related search’ for some terms that are linked to piracy.

Clicking on those posters actually links to a search for the movie title with the keyword “pirated.” A few years ago that would point to pirate sites, but those have been scrubbed from the top search results now.

Finally, for those who were hoping that this would also work for The Pirate Bay, we have to disappoint. Instead of a reel of Pirate Bay releases, Google just features three films that mention The Pirate Bay.

This isn’t the first time that Google’s algorithms have delivered an unexpected piracy twist. A few years ago, movie ratings from pirate sites showed up in Google’s search snippets, accidentally promoting pirate releases. These soon disappeared after the faux pas was made public.