Grooveshark users in Germany officially became former users of the service today after the US-based music streaming site stopped offering its service there. Grooveshark has in excess of 30 million users, less than 10% of which are located in Germany.

Rather than being presented with the usual page from where almost any music in the world can be found, local users were instead greeted with the following message: 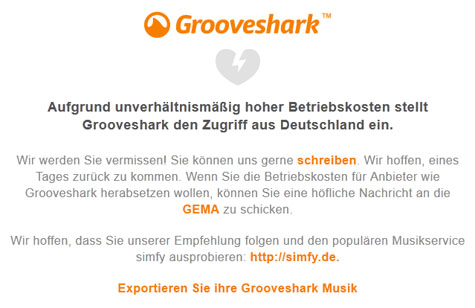 Due to unreasonably high operating costs, the notice reads, Grooveshark is now inaccessible from Germany.

“We will miss you! You can write to us. We hope to come back one day,” it continues. “If you want to reduce the operating costs for both providers and Grooveshark, you can send a polite message to GEMA.”

GEMA is the local music rights collections organization in Germany and according to its own stats has 64,000 members and represents more than 2 million rights holders.

The organization has a history of licensing disputes, most visibly when it started blocking videos on YouTube in order to achieve a deal on its terms with the Google-owned company.

The unpopular move was even met with criticism from prominent music industry players, including CEO of Sony Music, Edgar Berger, who suggested that members of GEMA’s supervisory board had not yet arrived in the digital era.

“We want to see streaming services like Vevo and Spotify in the German market. [These platforms] must not be blocked by GEMA any longer,” he said. “Artists and music companies are losing sales in the millions.”

Nevertheless, it’s unlikely that Berger will apply the same sentiments to Grooveshark’s plight. All the major labels – Sony, Universal, Warner and EMI – are suing Grooveshark over copyright infringement or royalty issues in the United States.

That legal process was stepped up this week when Grooveshark sent a reportedly aggressive and broad-reaching subpoena to Digital Music News in an attempt to unmask a supposed whistleblower whose allegations form the basis of Universal’s copyright infringement lawsuit against the music streamer.

On its German page, Grooveshark concludes its German departure message by suggesting that users test out the local Simfy music service as an alternative, but many will simply head over to Google and type “US proxy” instead.