Faced with increasing local website censorship and Internet services that restrict access depending on where a user is based, more and more people are turning to specialist services designed to overcome such limitations.

With prices plummeting to just a few dollars a month in recent years, VPNs are now within the budgets of most people. However, there are always those who prefer to get such services for free, without giving much consideration to how that might be economically viable.

One of the most popular free VPN/geo-unblocking solutions on the planet is operated by Israel-based Hola. It can be added to most popular browsers in seconds and has an impressive seven million users on Chrome alone. Overall the company boasts 46 million users of its service.

Now, however, the company is facing accusations from 8chan message board operator Fredrick Brennan. He claims that Hola users’ computers were used to attack his website without their knowledge, and that was made possible by the way Hola is setup.

“When a user installs Hola, he becomes a VPN endpoint, and other users of the Hola network may exit through his internet connection and take on his IP. This is what makes it free: Hola does not pay for the bandwidth that its VPN uses at all, and there is no user opt out for this,” Brennan says. 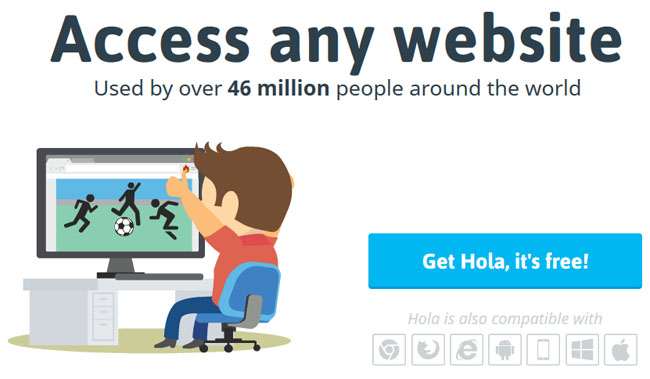 While this will come as a surprise to many, Hola says it has never tried to hide the methods it employs to offer a free service.

Speaking with TorrentFreak, Hola founder Ofer Vilenski says that his company offers two tiers of service – the free option (which sees traffic routed between Hola users) and a premium service, which operates like a traditional VPN.

However, Brennan says that Hola goes a step further, by selling Hola users’ bandwidth to another company.

“Hola has gotten greedy. They recently (late 2014) realized that they basically have a 9 million IP strong botnet on their hands, and they began selling access to this botnet (right now, for HTTP requests only) at https://luminati.io,” the 8chan owner says.

TorrentFreak asked Vilenski about Brennan’s claims. Again, there was no denial.

“We have always made it clear that Hola is built for the user and with the user in mind. We’ve explained the technical aspects of it in our FAQ and have always advertised in our FAQ the ability to pay for non-commercial use,” Vilenski says.

And this is how it works.

Hola generates revenue by selling a premium service to customers through its Luminati brand. The resources and bandwidth for the Luminati product are provided by Hola users’ computers when they are sitting idle. In basic terms, Hola users get their service for free as long as they’re prepared to let Hola hand their resources to Luminati for resale. Any users who don’t want this to happen can buy Hola for $5 per month.

Fair enough perhaps – but how does Luminati feature in Brennan’s problems? It appears his interest in the service was piqued after 8chan was hit by multiple denial of service attacks this week which originated from the Luminati / Hola network.

“An attacker used the Luminati network to send thousands of legitimate-looking POST requests to 8chan’s post.php in 30 seconds, representing a 100x spike over peak traffic and crashing PHP-FPM,” Brennan says.

Again, TorrentFreak asked Vilenski for his input. Again, there was no denial.

“If 8chan was harmed, then a reasonable course of action would be to obtain a court order for information and we can release the contact information of this user so that they can further pursue the damages with him.”

Vilenski says that Hola screens users of its “commercial network” (Luminati) prior to them being allowed to use it but in this case “BUI” slipped through the net. “Adjustments” have been made, Hola’s founder says.

“We have communicated directly with the founder of 8Chan to make sure that once we terminated BUI’s account they’ve had no further problems, and it seems that this is the case,” Vilenski says.

It is likely the majority of Hola’s users have no idea how the company’s business model operates, even though it is made fairly clear in its extensive FAQ/ToS [see note below]. Installing a browser extension takes seconds and if it works as advertised, most people will be happy.

Whether this episode will affect Hola’s business moving forward is open to question but for those with a few dollars to spend there are plenty of options in the market. Until then, however, those looking for free options should read the small print before clicking install.

Update: It appears that Hola only recently changed/edited their FAQ to add in the details about Luminati. We have asked the company to tell us exactly when those changes were made. Updates when they arrive.

Luminati, the Company Behind Hola, Sues GeoSurf Owner in US Court