Spearheaded by the MPAA, Hollywood’s major movie studios continuously emphasize how copyright infringement is costing them billions of dollars every year. Pirates are ruining the industry and are the direct reason for the loss of thousands of jobs, they claim.

However, the movie industry itself is no stranger to infringing on the rights of others. In fact, in 1902 Thomas Edison himself copied Georges Méliès’ film A Trip to the Moon without permission to show it in US theaters. This act of piracy eventually resulted in the bankruptcy of the French filmmaker.

In the century that followed, and even today, the movie industry is often accused of copyright infringement, most recently by the best-selling author Joe Quirk. Quirk published his first novel titled The Ultimate Rush in 1998, and recently found out that Sony Pictures and Columbia Pictures are planning to release a new movie that appears to be copied from his work.

Aside from the titles, Quirk’s book and the upcoming film Premium Rush are strikingly similar, which prompted the author to start a lawsuit earlier this week.

In addition to Sony Pictures and Columbia Pictures, the lawsuit also targets the production company Pariah and screenplay writers John Kamps and David Koepp. All defendants are accused of several copyright-related offenses as they allegedly turned Quirk’s book into a movie script without permission.

The complaint includes two dozen pages littered with examples of similarities in the plot, characters, various scenes and even dialogues.

The Ultimate Rush vs. Premium Rush 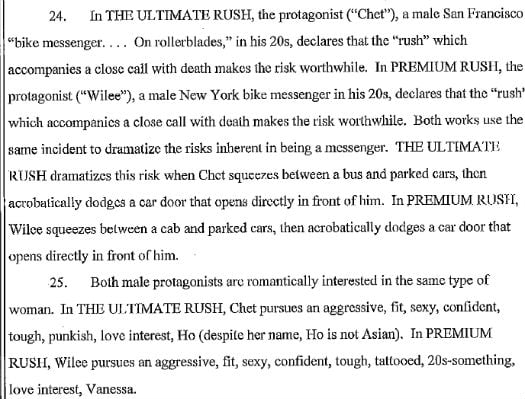 Through the lawsuit Joe Quirk hopes to be compensated for damages the alleged pirating of his book by the prominent movie studios have and will cost. The author also seeks a halt to the distribution of the film and all related materials.

Quirk further seeks to recover all profits that the movie studios will make from the “unlawful exploitation” of his book.

Premium Rush has finished filming and is currently in the post-production stage. The film is scheduled to be released on January 13 next year, but it’s now up to the District Court to decide whether this will go ahead.