Pirate site blockades are the preferred anti-piracy tool for many copyright holders around the world. This is also the case in Australia, where blocking injunctions were made possible five years ago following amendments to copyright law.

Over the past years, many of the world’s largest torrent and streaming sites have already been blocked, but new threats continue to surface. This requires rightsholders to stay alert and file new blocking requests if needed, such as a new one they submitted late last month.

In a new application, filed at the Federal Court of Australia, several key movie industry players including Disney, Netflix, Village Roadshow, and Warner Bros. request ISPs to block over a hundred new domains. According to the filing, these sites are piracy havens.

“The primary purpose or effect of the Target Online Locations is to infringe or facilitate the infringement of copyright,” the movie companies inform the court.

The operators of these sites are apparently fully aware of their alleged wrongdoing and show a “disregard for copyright,” the court filing reads.

“The owners or operators of the Target Online Locations demonstrate a disregard for copyright generally, in that they provide easy access to the copyright works of others,” the application states.

The request is similar to the ones we have reported on in the past. It covers a wide range of pirate sites, totaling well over a hundred domain names. This includes the likes of 0gomovies.org, 1377x.to, best-series.me, pirateproxy.wtf, warez-bb.org, kissasian.sh, and bs.to.

Many of the targets can indeed be classified as pirate sites. However, there are also some clear outliers, which are more controversial. 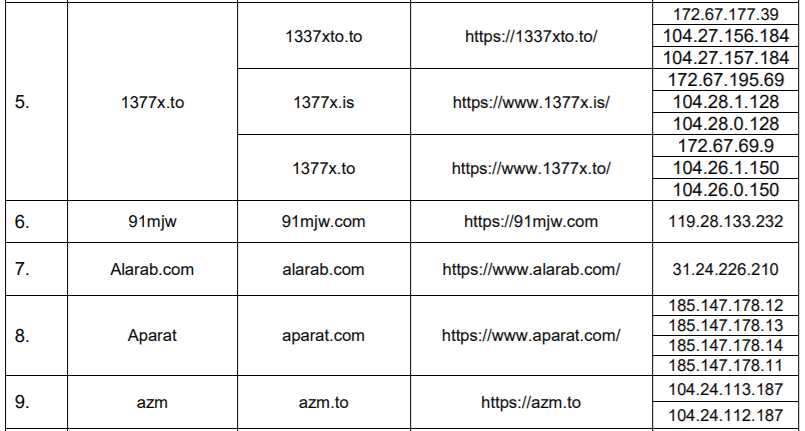 The popular video platform Aparat, which is often referred to as Iran’s YouTube, provides one such example. Aparat is one of the most-visited sites in the world and the second most-visited site in Iran, where it’s only beaten by Google.com.

Aparat’s owners are not in hiding either. The site is owned by the company Saba Idea, which is a prominent startup that has been regularly featured in mainstream media such as The Guardian and the Wall Street Journal.

Like YouTube and other video services, Aparat relies on user-uploaded content. This means that copyrighted content may be added occasionally. However, the site also has premium publishers and paid videos from copyright holders, so it’s certainly not a typical pirate site.

Another odd entry in the new blocking application is the Israeli newspaper Kul al-Arab. The influential Arabic publication has all the earmarks of a regular news publication, but the movie companies believe that it should be classified as a pirate site.

While we haven’t seen a newspaper being targeted before, it may not be totally unwarranted, as the site has a VOD section where many Hollywood and Netflix titles are freely available. 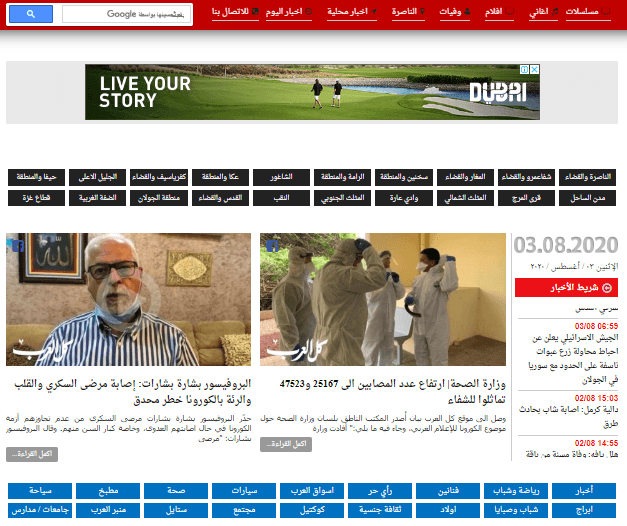 Site blocking is generally used as a tool of last resort, and that’s also the case here, the movie companies suggest.

“No other remedy under the Copyright Act is reasonably practicable or reasonably likely to be effective for these infringements,” the blocking application reads.

If the blocking request is granted, the affected sites will be made inaccessible in Australia for three years. While the site operators are not being sued directly, they do have the opportunity to object to the request.

TorrentFreak reached out to Aparat for a comment on the inclusion of its video platform but we have yet to hear back. The attorney for the movie companies didn’t immediately respond to our request for comment either.

Below is a list of all sites and domains featured in the latest blocking application (pdf).