Under US law, hosting companies are seen as neutral intermediaries, but according to the MPAA, these companies should take more responsibility for their role in the piracy ecosystem.

In a letter sent to the US

The IPEC requested input from the public on the new version of its Joint Strategic Plan for Intellectual Property Enforcement to which the MPAA replied with a broad range of suggestions.

The group notes that while there has been a lot of progress on the legal supply side, piracy remains a problem. This is in part due to a lack of involvement from third-party Internet services, who could do more to combat piracy.

“Compounding matters is the lack of accountability of some major online platforms for their failure to prevent content theft and other illicit conduct over their services,” the MPAA’s Senior Vice President Neil Fried writes.

In its submission, the MPAA highlights that there are some voluntary agreements in place, with payment services and advertisers for example, but that’s not enough. Other platforms and intermediaries should follow suit, they argue.

This includes hosting providers, which have the ability to shut pirate sites down. However, according to the MPAA, many refuse to do so, voluntarily at least.

“Given the central role of hosting providers in the online ecosystem, it is disconcerting that many refuse to take action when notified that their hosting services are being used in clear violation of their own terms of service prohibiting intellectual property infringement and in blatant violation of the law,” the MPAA notes.

This should change, and the Hollywood group has some concrete examples of how these companies can improve.

Besides processing takedown notices and terminating repeat infringers, as they are required to do by law, the MPAA also wants hosting companies to use automated piracy filters on their servers.

In addition, hosting providers should not challenge suspension court orders, when copyright holders go up against pirate sites. Going a step further, hosts should keep an eye on high traffic volumes which may be infringing, and ban referral traffic from pirate sites outright.

Some of the MPAA’s recommendations 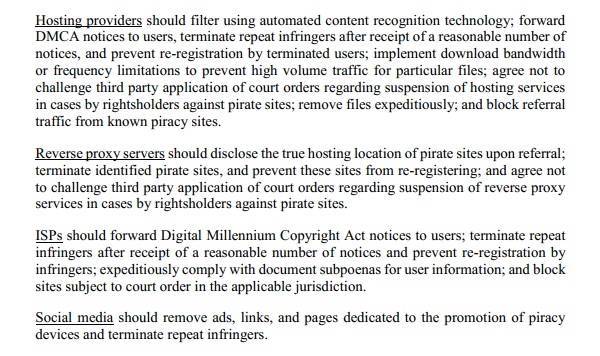 Some of these suggestions go pretty far. The referral ban, for example, means that hosting providers would have to make sure that Pirate Bay visitors are blocked from entering one of the sites they host through a direct link, even if that site itself is perfectly legal.

The referral ban may be aimed at stopping pirate linking sites from using legitimate storage services for infringing content, but that would result in collateral damage as well.

Hosting companies are not the only web-services that can ‘improve’ their anti-piracy policies, of course. The MPAA also wants reverse proxy servers, such as Cloudflare, to terminate infringing sites, or at least identify their true location.

Regular ISPs don’t have to block pirate sites, at least not voluntarily. However, the MPAA notes that this changes when they are subject to a court order in the applicable jurisdiction.

The Hollywood group hopes that IPEC will continue its efforts to encourage these companies to implement “voluntary” measures. It anticipates that some will argue that this violates free expression, but MPAA notes that it does the opposite.

“[C]urbing illegal activity promotes free expression by creating a safer environment where individuals feel comfortable to communicate and engage in commerce, and to create and lawfully access content.”

The push for voluntary agreements with Internet services is just the tip of the iceberg though.

The MPAA further asks IPEC to make sure that that access to WHOIS data should be made public again, to ensure that trade agreements include proper copyright protections, and to encourage other Government departments including the Department of Justice to beef up their anti-piracy efforts.