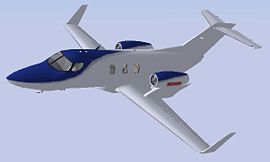 First released in 1997, FlightGear is one of the oldest flight simulators still available today.

The open source software is available on all popular operating systems and is used by millions of people, as well as professional organizations such as NASA.

Last week the FlightGear team was taken by surprise after receiving a takedown request from Honda, one of the aircraft manufacturers. In a letter the company asked FlightGear to remove the Honda Jet from the game, as it was infringing on their trademarks.

TorrentFreak spoke with FlightGear project manager Curtis Olson, who explained that in their long history the have never received a similar request.

“As far as I can recall, this is the first request of this type that FlightGear has had to address,” Olson says.

FlightGear has always been cautious to stay on the right side of the law and pays close attention to the licensing terms of source code and data. Until the letter came in, the team believed that the Honda Jet model could be used without problems.

“I am not a lawyer and not an expert in trademark law. FlightGear is simply trying to create an accurate simulation of the real world. If something exists in the real world, it seems fair game to create a simple representation of it in our simulator,” Olson says.

“FlightGear puts quite a bit of effort into always trying to do the right thing, so this situation did catch us off guard,” he adds.

In their letter Honda’s lawyers point out that FlightGear is infringing on the company’s trademarks. They note that the jet’s form and appearance is protected by trademark laws, and the same is true for the logos and names that are used.

FlightGear saw no other option than to comply with the request and has removed the Honda Jet model from its website and aircraft downloads page. In addition, the model has been removed from the FlightGear Git.

Through the mailing list Olson informed all developers about the decision. Initially, the idea of challenging the request might have crossed his mind, but in the end the safest option was take the aircraft down.

“I personally don’t have sufficient time, lawyers, experience and intelligence to battle something like this, and although it makes me sad, an all out legal battle probably is not in anyone’s interest even if we thought we had some sort of legal argument to make,” Olson concluded.

Why Honda would object to being included in FlightGear remains a mystery. While the lawyers probably have the law on their side, it is hard to imagine how the company could be harmed by being included in an open source game for aviation fanatics.