For Disney, Twentieth Century Fox, Universal, Columbia and Warner, their battle with the Hotfile cyberlocker service is developing into a costly and complicated affair.

The MPAA, who would love a decisive victory against a cyberlocker service under their belt, probably selected Hotfile because of its relative lack of might when compared to market leaders RapidShare and MegaUpload. The company also has a track record of settling lawsuits rather than fighting them. The outcome in the case, whichever way it goes, will have serious implications for others in the same field in the United States.

At this stage there are no indications Hotfile will roll over in this case, but as pages and pages of legal papers are filed and responded to, it is becoming increasingly clear that the MPAA is determined to play hardball.

In a filing from Hotfile dated June 17th, the company bemoans the tactics employed by the MPAA, describing their requests for information as “over-reaching” and tantamount to “murder by litigation.”

So what data does the MPAA want from Hotfile? In a single word – everything.

“In five short demands for documents and two related interrogatories, Plaintiffs seek all data referring to all files hosted by Hotfile, all data about Hotfile’s users, all data about Hotfile’s business partners [aka affiliates], every line of source code ever written, and virtually every conceivable piece of financial data available regarding Hotfile or its business partners or its individual founders,” Hotfile’s legal time write.

Nevertheless, it appears that up to a point Hotfile is prepared to comply with the requests of the MPAA. However, as the tables below show, the company is trying to protect the identities of users and affiliates as much as it can. 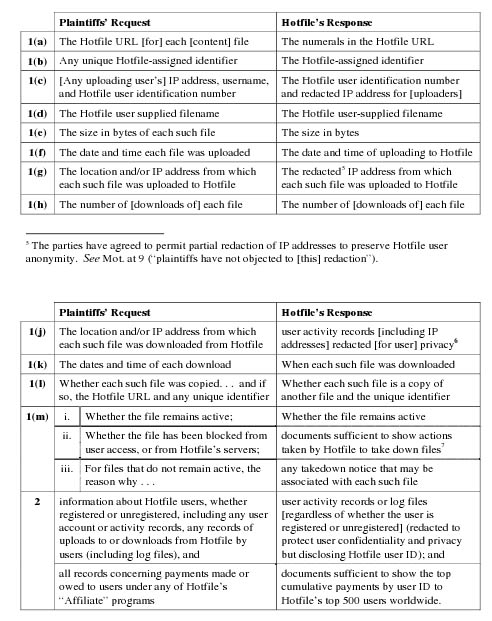 The MPAA’s requests for disclosure go beyond user data. The Hollywood outfit is demanding that Hotfile hands over every version of the site’s source code that has ever existed.

Hotfile is currently resisting that request, describing its code as a trade secret which took two people more than 1,000 hours to create. Hotfile’s software gives it a competitive advantage, its legal team argues, and it would prove catastrophic if it fell into the wrong hands.

The case is becoming increasingly complex and is already developing into a bloody legal brawl. Will Hotfile continue to resist the temptation to settle in the face of “murderous litigation”, or will it concede defeat in the face of overwhelming opposition and financial resources?

Hotfile uploaders, downloaders and affiliates will certainly be hoping for the former.