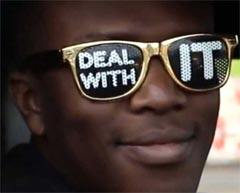 If YouTube stars are the world’s next big celebrities, Olajide “JJ” Olatunji, Jr. plays in the big league.

KSI is currently running the 22nd most-subscribed YouTube channel on the planet and with more than three billion views, he’s a truly influencial global player.

All this fame has opened up plenty of opportunities for the millionaire 23-year-old. In addition to launching a rap career, KSI has just starred in a movie with fellow YouTuber Caspar Lee.

Laid in America is the story of two guys attempting to do what the title suggests and for those interested in assessing their success, the movie has just come out on Blu-ray. However, it’s also available on torrent sites and KSI is far from impressed.

In a seven-minute video addressed to fans of both kinds (those who pay and those who do not), the YouTube megastar goes completely off the deep end. For his fans his bad language and crazy antics aren’t anything new but as anti-piracy rants go, this one is pretty epic.

“Stop pirating the fucking movie. For fuck’s sake man!” he begins. “I get it, I get it why people pirate. If there’s no physical way of getting what you want then yeah, I get it.”

Highlighting a free music track called “For The Summer” that he previously released with Randolph, KSI says that it’s OK for people to consume that how they like. Torrenting his movie, on the other hand, is completely unacceptable.

“[Since it has a price tag], evidently this shit is not for free,” KSI says. “Trust me, there isn’t a shortage of places where you can go to get this fucking thing. So why the fuck are you watching it without paying for it? You stealing mother-fucking piece of shit.”

KSI then goes on to question whether people are pirating his movie because they don’t like him, specifically since he’s a “black guy doing alright for himself.” With almost 15 million subscribers, that hardly seems likely.

But while his delivery may be unorthodox, KSI’s anti-piracy message is pretty standard. In fact, his message is SO familiar it could’ve been penned by the PR department of any major Hollywood studio.

“You’re fucking over the producer, director, actors, people who did the music, the cameramen, the lighting crew, the set crew. Seriously, it’s fucking ridiculous. Laid in America is going to be the most illegally downloaded movie of last month and this month as well, what the fuck?”

While that claim isn’t true, the thought that KSI’s Hollywood-style rant might be industry-sponsored in some way is a pretty tantalizing one as it would reach an audience the studios couldn’t easily reach by other means. Whether it would work is another matter, however.

But for what it’s worth, KSI says he doesn’t care about the money being lost through downloads, he only wants to get enough sales so he can make Laid in America 2. With that in mind, this kind of tweet only provokes him further. 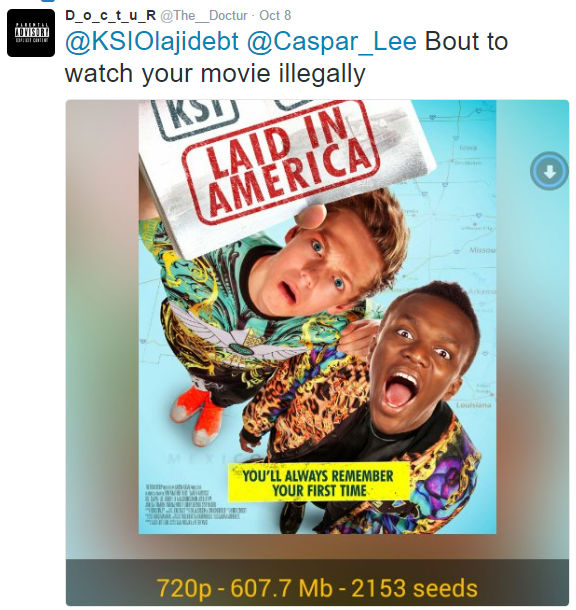 Faced with torrent taunts, KSI turns his rant up to 11, threatening violence against pirates, calling them unrepeatable words, and promising to use them as a toilet. He says he simply can’t grasp the idea that after giving all of his videos away for free, the one time he asks people to pay, they won’t. Welcome to the Internet.

KSI is quite a character and while he comes over as wild, he certainly knows what he’s doing. No doubt he’s angry (or maybe his distributor Universal Studios is angry) that people are pirating his movie but he also knows his rants about the topic are making him money while attracting even more attention.

Thus far, the video embedded below has almost 1.9 million views but KSI’s change of tone halfway through suggests he really does care about his stuff getting pirated. Maybe that’s part of the show too, but it’s fairly convincing. (Warning:NSFW x2)

Finally, as any YouTube visitor knows, the comments on the site can be absolutely vicious and those under KSI’s video are no different. There are hundreds informing the YouTube star that his movie is going to get pirated anyway but there are also some pointing out that KSI has no right to ask other people not to pirate.

Apparently, some time ago, KSI was found out to be using a pirated version of Sony Vegas to create his YouTube videos. His ‘fans’ aren’t letting him forget that but in true rebellious fashion, KSI isn’t letting it bother him either.

Armed with an image depicting himself as a pirate, KSI fired right back. 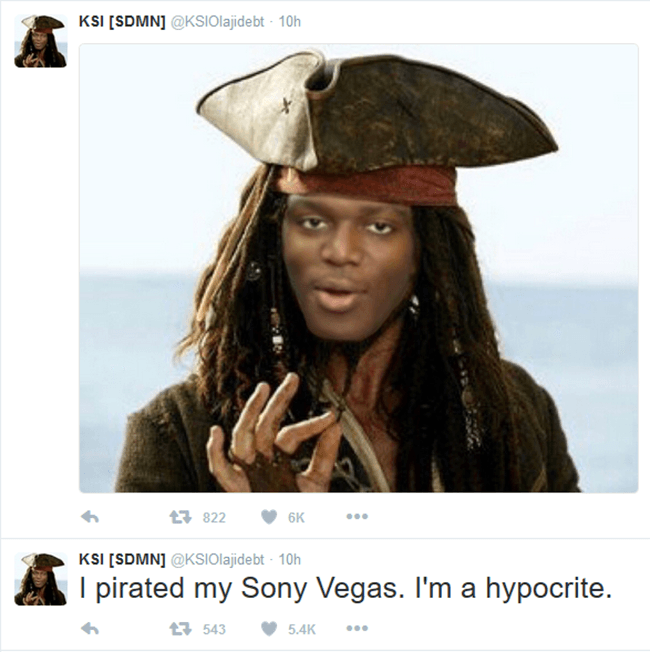