Anyone with a Kodi setup understands how it works. Download the software, install a bunch of third party addons, and enjoy TV shows, sports, movies and PPVs, all for free.

While millions have fun doing just that, even the leading experts in Kodi setups acknowledge that they are limited by the content being provided by third parties. Sometimes the quality is good and the service is reliable but at the other extremes, people can spend more time getting stuff to work than actually watching and relaxing.

For those who simply can’t stand this kind of messing around, going legit is the sensible option. Subscribe to a big TV package with a local provider, pay for all the sports and PPVs, tack on the movie package, throw in Netflix for good measure, and then sit back and enjoy the ride. Trouble is, it costs a fortune.

However, somewhere in the middle lies a third way. It’s a lurking piracy monster that is getting very little press.

IPTV is short for Internet Protocol television, which is a fancy way of describing TV content that’s streamed over the Internet rather than via terrestrial, satellite, or cable formats. That said, thinking this is all IPTV has to offer would be a big mistake.

We aren’t going to name names, but the service shown to TF this week boasts more than 3,000 live and premium TV channels from all over the world, many of them in HD quality. Apparently, a bigger package of more than 4,000 channels is also available if you really want to gorge on media.

Streamed over the web, the channels can be viewed on a range of devices, from VLC Media Player on PC, through to Android and Apple apps. However, many people are choosing to consume via small set-top boxes.

These relatively cheap (and entirely legal) devices connect to both the Internet and any modern TV. They transform the way streaming content is consumed, whatever the source – legitimate or otherwise. Instead of reams of text in a VLC playlist, for example, these devices (coupled with an (in)appropriate illegal IPTV service) are almost indistinguishable from the real deal.

Channels are presented in Electronic Program Guide format (EPG) and switching from one to another is achieved in fractions of a second. Poor photography skills (and dodgy Christmas wallpaper aside), the menus are very well presented. 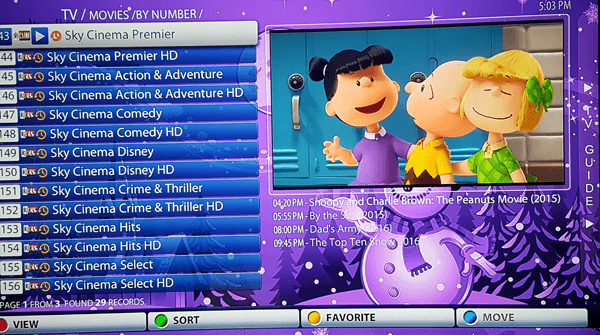 As shown in the image above, when a channel is selected a moving preview appears in the window on the right. Under that sits an EPG covering the next few hours which allows for planning ahead. Also accessible are full channel EPG views that are easily as good as many commercial offerings.

But while at first glance these services seem dedicated to only live TV (albeit on any channel you could imagine, anywhere in the world), many have another trick up their sleeve. The service we saw also carries hundreds of the latest movies, up to 4K in resolution and even in 3D. They too can be accessed from professional looking menus and play, interruption free, every single time. 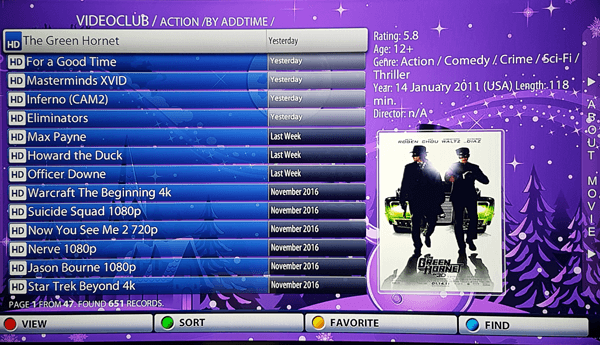 Also on offer is a massive ‘catch-up’ service which provides all the latest episodes of the most popular shows on-demand. Shows appear to be available minutes after airing and can be paused and skipped within a convenient media player setup.

Instead of using dedicated hardware, many IPTV users also use Kodi to view these kinds of streams. There are plenty of tutorials available online which detail how to activate the PVR component of the popular media player to access these kinds of services. However, from what we’ve seen so far, the Linux box experience is head and shoulders above everything else.

Like a good VPN service, a decent (albeit illegal) IPTV service costs money – a few dollars, pounds, or euros per month. Depending on what they’re offering, Netflix-style deals are possible but for those who simply must have everything, it’s closer to double that price per month, or less if one subscribes for a whole year.

That being said, as we’ve seen before in many areas of piracy, these pirate IPTV services offer massively more bang for your buck than official offerings. The only practical problem is that there aren’t enough hours in a lifetime to watch everything they have to offer. The selection is bewildering.

Needless to say, these services are definitely illegal, certainly when it comes down to offering them to the public. Whether it’s illegal for users to watch these streams is down to individual countries’ laws, but on the whole the legal system is untested in both Europe and the United States so prosecutions seem unlikely, at least for now.