Iron Maiden Tracks Down Pirates…. And Gives Them Concerts? (Updated)

Over the past several years numerous studies have shown that on average file-sharers spend more money on legal purchases, including concert tickets and merchandise.

The most logical explanation for this finding is that “pirates” are more engaged than those who don’t share, and that they complement their legal purchases with unauthorized downloads.

This means that unauthorized file-sharers are in fact the music industry’s best customers. So, instead of hunting down these pirates for lawsuits, it may be more rewarding to play for them.

The English heavy metal band Iron Maiden is reportedly doing just that. The veteran musicians use the services of music analytics company Musicmetric which allows them to see where their albums are most pirated.

“If you know what drives engagement you can maximize the value of your fan base. Artists could say ‘we’re getting pirated here, let’s do something about it’, or ‘we’re popular here, let’s play a show’,” Gregory Mead, CEO and co-founder of Musicmetric told Cite.

Instead of suing these unauthorized file-sharers, the band used the information as input for its tours, and not without success.

“Maiden have been rather successful in turning free file-sharing into fee-paying fans,” Mead said.

The overview below, for example, shows that Iron Maiden is most popular among Brazilian pirates with 463,467 downloads in recent years. The band is also relatively popular in Chile with 1,300 downloads per 100,000 Internet users, which totals 70,932 downloads. 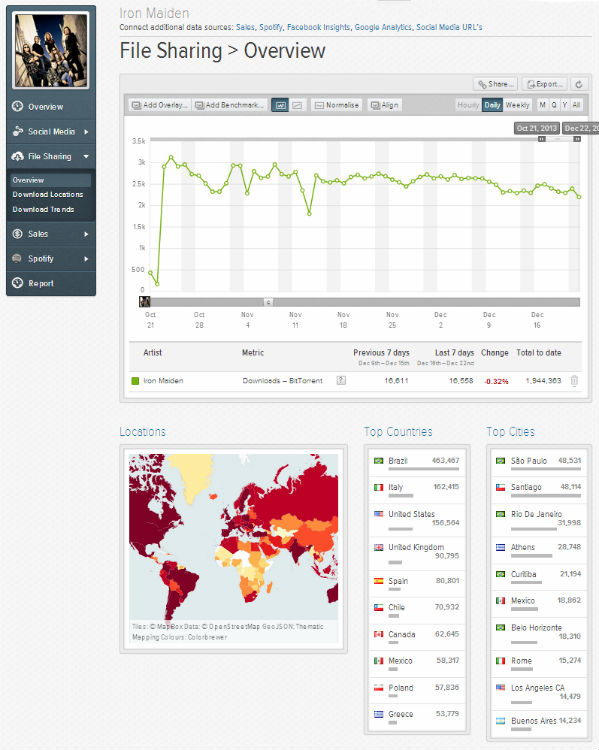 Iron Maiden’s recent tour had a heavy focus on South America, where the band has a lot of Twitter followers and unauthorized downloads. The band played in Paraguay for the first time, for example, and concerts were sold out throughout the region.

Musicmetric suggests that the file-sharing data helped Iron Maiden turn these pirates into paying customers, simply by heading over there and playing for them. It’s impossible to download the true experience of a live concert, so the chances are high that several pirates will turn up.

“If you engage with fans, there is a chance to turn a percentage into paying customers. You can see that through various bands using the BitTorrent network in a legal way to share content,” Mead says.

It’s refreshing to see that instead of hunting down pirates for lawsuits, file-sharing data is being used by artists to plan their gigs. After all, it is much more rewarding to play for your fans than to try to bankrupt them in court.

Update: The Cite report suggested that Iron Maiden used the analytics to plan their concerts, however, this claim remains unsubstantiated. TorrentFreak contacted Musicmetric before publication but we were unable to get a comment in time as they were out of the office for a few days.