Is Bing Considered a Lower Piracy Threat Than Google?

According to stats released by comScore, Google sites led the search market in August with 63.8 percent of search queries conducted.

Google’s dominance is hardly a surprise. In recent years ‘Google’ has become a verb and many of the world’s Internet users have the site as their browsing homepage. However, there are other options, such as Microsoft’s Bing which took second place in comScore’s rankings with 20.6 percent of searches.

As market leaders both companies currently publish transparency reports and this week Microsoft issued an upgraded edition which includes the number of copyright takedown requests it received during the first half of 2015.

“Links to webpages containing material that infringe the rights of copyright owners may be removed from our search results provided we receive a legally sufficient notice of infringement from an owner or an authorized agent acting on that owner’s behalf. The following numbers relate to requests to remove links to webpages from our Bing search engine results,” the company announced.

As seen in the image above, Microsoft received more than a million requests in the first six months of 2015 which in total demanded the takedown of 24.5 million URLs.

The tech giant rejected more than two million URLs for reasons unknown but it’s likely that a large proportion were duplicate entries. Microsoft also says that it tries to consider when potentially infringing content is allowed under the law.

“We are committed to freedom of expression and the rights of users to engage in uses that may be permissible under applicable copyright laws,” the company said.

But what is perhaps most interesting about Microsoft’s data is how it can be compared to Google’s.

To give an idea of scale, Bing indexes largely the same content as Google. However, while Bing receives an average of four million URL takedown requests per month, Google receives more than double – sometimes treble – that number every single week.

In fact, Google received 51,472,940 URL requests last month alone, a number that Bing will take around 12 months to match. So, unless Microsoft is making it difficult for copyright holders to complain (and there’s no indication that it is), the suggestion here is that copyright holders consider Bing a disproportionately lower piracy threat than its visitor numbers might indicate.

That’s also interesting when it comes to how Bing’s search features operate. While Google has been censoring its auto-suggest and auto-complete features for some time, Bing appears to be much less constrained. Entering the text ‘thep’ happily completes to ThePirateBay.se and conveniently advises users that they’re accessing the official site. 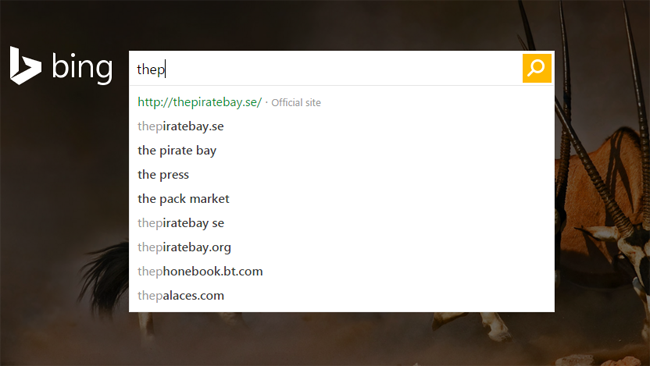 While it’s unlikely that the company is attempting to be ‘pirate friendly’ with its auto-suggest, Microsoft has been under much less pressure than rival Google at the hands of Hollywood and the record labels. As a result it appears to be slipping somewhat (but not entirely) under the radar.

Whether users searching for free content will begin to use Bing more often remains to be seen but one thing is for sure, browsing habits are very hard to break. On auto-pilot today this writer entered ‘bing’ into the Google search box several times when ‘bing.com’ directly would have sufficed. That’s never an issue with Google, ever.