These requests have increased dramatically over the years. In 2008, the search engine received only a few dozen takedown notices during the entire year, but the same number is now reached in a matter of seconds.

At TF we processed the number of URLs submitted by copyright holders over the past month, which were roughly 47 million in total. Or put differently, Google is now being asked to remove well over 18 links to alleged copyright infringing material every second.

The BPI and RIAA are among the most active senders of DMCA takedown requests. Together, the music groups have sent notices for 5.5 million URLs over the past month, which represents 12% of all requests.

Both groups are topped by takedown agencies Rivendell and Degban though, who are good for reporting 7.7 and 6.3 million URLs respectively. 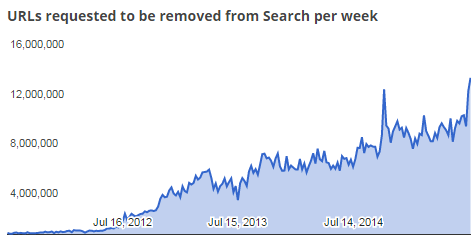 The vast majority of the reported links have been removed, but the takedown notices also include duplicate or non-infringing URLs for which Google takes no action.

Despite the frequent use of the takedown process many copyright holders are not happy with Google’s take on the piracy problem. Groups such as the RIAA and MPAA have repeatedly stressed that the company should do more to prevent pirated content from showing up in the top search results.

Faced with this harsh criticism, Google has gradually altered its search algorithms. October last year the company implemented the most significant change yet, aimed at downranking sites that often link to copyright-infringing material.

Still, the major copyright holders remain far from pleased. They’ve urged Google to completely de-list infringing domains and boost the rankings of legitimate sites. Until that happens, it’s unlikely that we’ll see the number of reported links going down.

TF reached out to Google for a comment on the ever-increasing volume of takedown requests and how the company is able to cope with the surge, but at the time of publication we haven’t heard back.