IsoHunt celebrates its 10th birthday today. Although torrents weren’t added to the search engine until August 2003, the site is one of the longest surviving BitTorrent sites around.

The fact that it’s still around is an achievement in itself as isoHunt has been fighting court cases with major media companies since 2006 when they were sued by the MPAA. Three years ago this case led to a court-ordered keyword filter to protect the copyrights of Hollywood.

IsoHunt protested this decision, fearing it would censor legitimate content, and hopes to get rid of the filter through the Appeals Court where the case is still active. A separate lawsuit against the major music labels in isoHunt’s home country Canada is also still ongoing.

Despite the legal troubles isoHunt remains one of the most frequently visited torrent sites. The site has millions of visitors every day and as can be seen from the graph below, the number of torrent files indexed has risen from little over 8 million to more than 11 million over the past year.

isoHunt’s torrent growth over the past year. 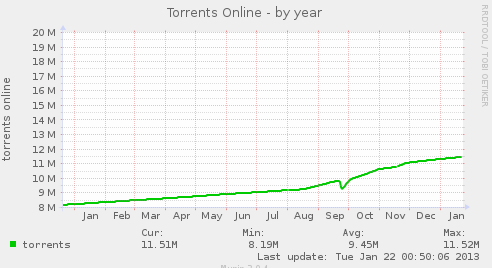 Commenting on the milestone birthday isoHunt founder Gary Fung recalls how many file-sharing sites and applications have come and gone in a decade, and how the Internet has changed.

“When I started isoHunt during engineering school, I truly did not think I’d be working on it for 10 years, but here I am. Napster, Kazaa, Suprnova, LokiTorrent. Big names have come and gone, and the Internet has changed,” Fung says.

While file-sharing has exploded in a decade, so have the legal and legislative actions against it. Large websites have been toppled and lawmakers are increasingly coming up with ideas to censor the internet to protect copyright holders. Fung, however, sees the balance slowly moving in favor of “The Internet.”

“One would think we the people of the Internet are losing to the copyright cartels, but I think different,” Fung says.

“I saw solidarity against tyranny in protests against SOPA, which did not pass. I see musicians and filmmakers slowly but surely warming up to new possibilities of Internet distribution and promotion, abandoning notions of ‘1 download = 1 lost sale’ in the physical age.”

While the Internet may indeed be accepted more as a legitimate means of distributing files, new technologies are likely to bring new challenges.

“Ideals of the Free Software movement and Creative Commons will face new challenges with 3D printed copies of physical objects, replicated from copyrightable digital designs. We are moving into the world of science fiction.”

“I’ve fought Hollywood’s lawsuit for almost 7 years now, it’s so ancient it’s almost not even worth mentioning. Same goes with CRIA’s lawsuit. I’m tired of this squabble and they trying to make me and isoHunt another scapegoat in their crusade of no historic meaning.”

Fung sees isoHunt as a “culture business,” facilitating transactions between creators and consumers. Building on this idea he want to spend the next decade bridging the gap between these groups even further.

“The only way to move forward is together, with the creators. For the next 10 years, I’m imagining a reboot of isoHunt. From a mostly passive search engine, to a new system where you the consumer can be active participants in bringing creators on board, and you can frictionlessly contribute to the creators.”

“I’m calling this isoHunt Spotlight for now, until we think of a better name. And this will be a new endeavour, a complement to isoHunt the search engine which will continue its mission of indexing any and all torrent links,” he says.

The new project is currently in early stages of development and according to isoHunt’s founder it will be a mashup between Kickstarter, Netflix, Spotify, Gamefly, Kindle Owners’ Lending Library, with appropriate licensing deals. A progressive idea for a torrent site, to say the least.

We congratulate Gary and isoHunt with the milestone birthday, and will be keeping a close eye on the developments in the coming decade.