“iTorrent”: A BitTorrent Client for your iPhone? 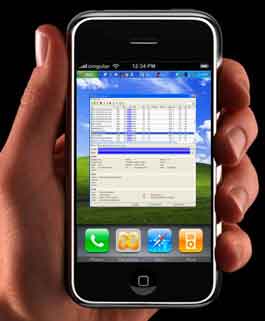 It would almost seem as if TorrentFreak is the only technologically based news site to have not carried some sort of piece about the iPhone, in one form or another. In order to correct this deficit, we wondered ‘would it be possible to torrent on one? After all, what can be more iconic than using something (potentially) dubbed iTorrent?

The technical specifications of the device certainly make it possible. It has more than enough cpu power for it, assuming a nice, tightly coded client was written. The built in WiFi (802.11b/g) and use of the EDGE 2.75G wireless network data transfer system allows a fairly widespread availability of reception.

According to one of the developers of the ‘iPhone-binutil‘ project, going by the name ‘geohot’, the only obstacle stopping it from making an application like “iTorrent” happening is their current lack of coding ability for the iPhone. The file system is open, and media players already exist, if for nothing else than playing media from iTunes.

On of the downsides it that, for many, the 3.4Gb free on a brand new phone (or 7.4Gb, if you went for the bigger one) may not be enough to hold much data, but it all depends on what you torrent. Bigger problems are that the battery will last only in the region of 6-8 hours at best (according to Apple’s figures) which isn’t the greatest. Additionally, many users have reported the wifi connections being on the slow side as far as data transfers go. Using EDGE is a lot slower, about 30k/sec max.

Of course, the benefits are that you can carry it around with you, and you have the wide range of content available, with the benefits of torrent file’s typical pricing (free). Of course, time will tell. Meanwhile, the lack of MMS on the iPhone has been a small thorn in the side of many owners. However, there is help at hand in the form of a workaround. More details here