Jail For File-Sharers Does Nothing to Increase Music Sales

There can be little doubt that given the chance the entertainment industries would like to see super-tough copyright legislation introduced worldwide. The idea is that with harsh legislation comes fear of serious repercussions, prompting a decision by the music consumer to purchase rather than pirate.

On October 1 2012, Japan introduced brand new legislation targeting users that not only upload (distribute) music without permission, but also those who merely download. There were no half measures on punishments either, with infringers facing up to two years in jail.

With those using P2P software to obtain music naturally being the most vulnerable to monitoring, the effects on those networks were both immediate and dramatic. According to data gathered by the General Association of Copyright for Computer Software, populations of three key file-sharing networks plummeted as the law was introduced and have since failed to recover. 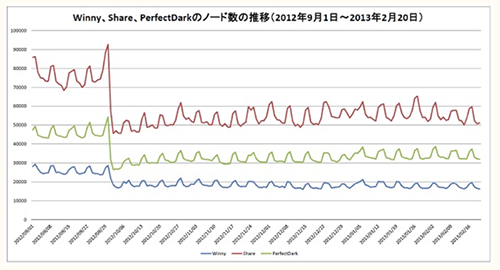 So what effect did this exodus have on the market for recorded music?

According to figures published by the Recording Industry Association of Japan (RIAJ), after the new law was passed physical sales increased, with CDs enjoying a boost of 5% between October 2012 and June 2013 when compared to the period October 2011 to June 2012.

Given the legal threats against file-sharers in place since October 2012, the overall digital market isn’t looking great either, despite subscription services enjoying a sales boost in excess of 500%. 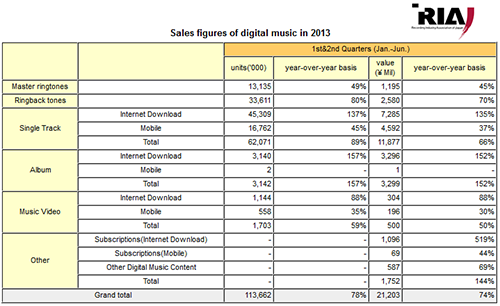 Another shift in the market has been witnessed in the CD album rental market, a popular method of listening to music in Japan. According to the RIAJ, since the introduction of the new legislation rentals have increased by 50%. However, no such boost has been seen in those making purchases.

“The new law has been effective in increasing the amount of CD rentals, but seems unconnected to the number of people who are actually buying music,” RIAJ chief Kenji Takasugi told NHK.

Was that a confession that harsh legislation online doesn’t affect the numbers of people actually buying music? Could be, and consider this. While album rentals go through the roof another interesting thing took place in the first half of 2013 – sales of digital singles dropped 34%. Perhaps those rented albums aren’t simply being listened to and returned?

Nevertheless, Japan is doing rather well overall and is set to become the world’s largest music market, bucking the trend by embracing physical formats while lagging behind on digital. What seems fairly certain for now is that threatening to send people to jail for downloading hasn’t helped much at all.