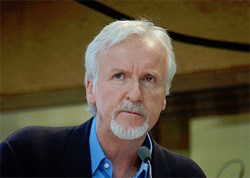 With blockbusters including Avatar, Titanic, Terminator (1&2) and Aliens under his belt, James Cameron is without doubt one of the most successful and respected filmmakers of modern times.

While promoting the 30th anniversary of “Aliens” at Comic-Con last week, Cameron and his wife Gale Anne Hurd (who produced the movie) spoke to Variety on a number of movie industry issues.

Among them were the potentially intertwined topics of Napster co-founder Sean Parker’s Screening Room project and, of course, the thorny debate over Internet piracy.

While Screening Room sounds exciting to some, Cameron does not share the sentiment. He believes that having first-run movies in the home will stop people heading off to the cinema, the place where filmmakers can really showcase their art and take the fight to piracy.

“The biggest hedge against piracy is still the sanctity of the viewing experience in a movie theater — when it comes to movies,” he says.

“With ‘The Walking Dead’ or something like that, that’s not what you’re selling, but if we’re talking about movies and theatrical exhibition, keeping it great, making it a special experience, is still the biggest hedge against [piracy].”

Interestingly, Cameron also says that even if piracy somehow became legal and download speeds were drastically improved, viewing content outside the theatrical setting would still come up short.

“You’re still watching [movies] on a small platform, and it’s not that social experience,” he explains.

The notion that innovation is the key to dealing with piracy is a belief that Cameron has held for a number of years.

Back in 2010 the filmmaker was basking in the glory of Avatar making more than $2.6 billion at the box office, despite pirate copies being available online. The sci-fi movie later went on to become the most pirated movie of all time, and the most successful too.

But without offering something different, something unique, the movie industry could face the same threat as the music industry did, Cameron warns.

“Just collectively the industry needs to know if we fail at creating a premium immersive experience in the theater, then the Napster-like downloading phenomenon will destroy the industry,” Cameron says.

“You won’t be able to afford to make a movie like ‘Avatar’ or ‘Transformers’ or ‘Captain America’ or any of these big films. The economics will no longer make sense. And you simply won’t have them in any format or platform.”

But while Cameron talks innovation, his producer wife Gale Anne Hurd cautions that those sharing content online might be doing so with rose-tinted glasses.

“I’ve just seen the figures — there’s money to be made in it and that’s not what people are thinking about. If they go to a torrent site or whatever, [the site’s operators] are making money through advertising.”

While that isn’t anything new to most file-sharers, Hurd also attacks the driving force behind many sharing platforms – the community’s idea that by uploading content to peers they’re spreading the enjoyment.

“There’s billions that people are making. The more that’s siphoned away because people are like, ‘Oh, I’ll just wait and I’ll stream it and I don’t even have to pay to stream it from a legitimate source,’ that is making it so much tougher on the exhibitors,” Hurd concludes.

Only time will tell whether projects such as Screening Room will be able to co-exist with the theatrical experience. If done well, however, both should be able to chip away at piracy – if the forecasts of Cameron and Fanning are to be believed.