A decade ago online video streaming was still a relatively new phenomenon. YouTube had just celebrated its first anniversary and Netflix hadn’t even rolled out its streaming service.

The piracy landscape also looked quite different at the time. Streaming sites were pretty much non-existent and the vast majority of all movie and TV-show piracy was torrent related.

This has drastically changed in recent years. According to a new report published by piracy tracking outfit MUSO, streaming sites have taken over as the prime source of video piracy.

New figures released publicly this week are part of the company’s annual report, which shows that nearly three quarters of all movie and TV-show traffic now goes to streaming sites.

The data from MUSO covers visits to 14,000 of the largest global piracy websites from 226 countries. In total, the company recorded 141 billion visits to pirate sites last year.

More than half of these visits relate to video piracy, which includes movies and TV-shows. The vast majority of these, 57.84 billion (74%), are visits to pirate streaming sites.

According to MUSO, there is a clear transition away from P2P sites and services to streaming. This can in part be explained by improved Internet connectivity across the globe.

Despite the availability of legal services, the United States tops the list of video pirates, representing 12% of total traffic, which is good for nearly 10 billion visits.

Torrent site traffic is slowly declining, for video content at least. Roughly 17% of the traffic went to torrent sites, and MUSO reported a clear downward trend during 2015. Direct download sites account for 8% of video piracy visits, which is relatively stable.

The data further reveals that both streaming pirates and torrent users predominantly use desktop machines to visit these sites, 72 and 77 percent respectively. This means that mobile piracy remains relatively small. 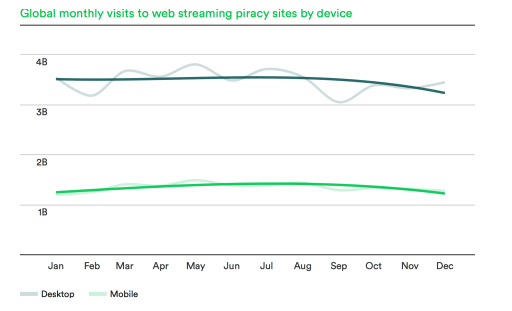 The movie and TV-show figures are in line with the overall trend MUSO revealed earlier, where pirates move away from torrent sites to other distribution platforms.

“Piracy audiences are becoming better connected, more tech savvy, and know what they want, which is why so many of them have chosen to stream infringing content, rather than download it illegally,” MUSO’s CCO Christopher Elkins says.

Overall, MUSO’s report concludes that the piracy ecosystem is rapidly changing. It will be interesting to see how the reported traffic trends develop during the years to come.